There are at least three reasons that I want to be able to give God Save The Fan a bad review. 1) Will Leitch forces me to write out God instead of referring to Him as G-d. 2) I was left out of the 100+ blogger name shout out in the Acknowledgments section. 3) Everyone kept staring at me at the gym because my book had a giant middle finger glaring at them. With that said, I still have to give God Save The Fan an A+ rating.

Will Leitch’s easy-to-read style allows anybody to read this 292 page book in a few days at most. There is one caveat to that statement: The Glossaries in each chapter take a while to peruse through, but are quite humorous at the same time. In fact, it was while reading the Glossary for the chapter on Owners that I literally had a laugh-out-loud moment (further scaring the cute University of Florida girls on the adjacent stationary bikes). Want to hear what it was? You will have to buy the book. Haha…no you don’t. Read below: 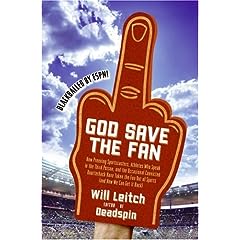 Paterno, Joe. Beloved Penn State coaching hero who, slowing down late in his career, sprinted off the field in order to avoid soiling himself, which is not something that has happened to, say, Rick Pitino.

Pitino, Rick. Has never soiled himself before a game.

Another section that I could not hold back from laughing at is Leitch’s discussion of Kordell Stewart denying rumors that he was gay. I’ll let you purchase the book to read that portion.

Do not have fear, though. God Save The Fan is not a book rife with poopie jokes and stupid comments about Barbaro (okay, Leitch spends a few pages on the superstar horse). And besides what some commentators may say, God Save The Fan is not devoted to making a mockery of ESPN for the most part. Instead, Leitch really focuses on the fan. He ponders why we act the way that we do as sports fans, but then rationalizes our behavior in many sections of the book.

The sections are broken down like any run of the mill sports symposium (75% of you are probably saying, huh?). The first chapter centers around the players and includes issues like steroids, Gilbert Arenas, Rick Ankiel, and John Rocker. Part two focuses on the owners. The NFL runs the world and Leitch really hates Peter Angelos. Part three, and a main focus of blogs like Deadspin.com and TheBigLead.com, looks at the media. I skipped the ESPN Clockwork Orange Experiment, which was actually first run on Leitch’s site, but enjoyed learning about some figures who have been blackballed by ESPN for certain comments that were made. Leitch ends the book focusing on the fans. He has a racist sister (just kidding), talks about how stupid we are to root for our teams to lose in order to get a higher draft pick, and explains why he will always be an Arizona Cardinals fan.

Overall, I think that God Save The Fan is a great buy if you are looking for a nonfiction book that will entertain and not bore you out of your mind. It does not include any extraordinary facts and will not allow you to achieve self-actualization, but it will make you reconsider why we as fans act certain ways when it comes to the sports industry. If anything, hopefully Leitch continues to link this site on his Deadspin.com Blogdome and gives us some credit for being a part of the blogging revolution in his next book!

4 replies on “Book Review: God Save The Fan”

Aha, my review only gave it an A-, no wonder it didn’t get a link (kidding). Nice work, Darren.

HA ! I think not this book will not see my shelve the Tittle alone turns me off it is blasphemy and with that note I wont make any more comments on this lol

But Steve sure picked out some excellente Salsa for his website!