When it comes down to it, there is no sport that I enjoy or know more about than baseball. A large reason for that is that I grew up with a father who was and continues to be a passionate New York Yankees fan (you have to remember that the Florida Marlins were not around in my early childhood). I have played organized baseball since I was five years old and continue be a student of the game. Thus, I was very happy when Trina Perrineau over at Rodale Books sent me a book called Change Up: An Oral History of 8 Key Events That Shaped Baseball, without any prior warning that the book was on its way.

The press sheet got me excited to crack the book open. Oral accounts of eight pivotal developments in the game of baseball told through stars like A-Rod, Jeter, Ichiro, Ripkin, etc. But honestly, it took me a while of reading before I actually started enjoying the book. In fact, there were times in the first third of the book where I almost put it aside and said, the hell with it. In the end, I am glad that I stuck it out, because some of the later chapters have actually made me a bigger fan of baseball than prior to reading Change Up. Without a doubt, I am more knowledgeable about the sport I love. 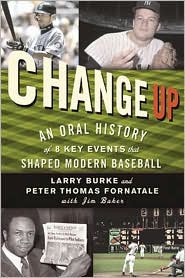 I think that a major hurdle that I had to get past was the unorthodox style of authors Larry Burke and Peter Thomas Fornatale. Before opening Change Up, I had never read a book that was 95% narrated by other people. The stories do a little jumping all over the place, which originally made it a little difficult for me to follow. Once I got the hang of it, I was conquering the book at a faster pace and enjoying the stories much more.

That being said, I did not get interested in Change Up, until Chapter 4, which was probably my favorite chapter of the book. In fact, if you purchase Change Up and run into the same issues that I initially did, do not allow yourself to give up and put the book aside. Instead, make sure to read Chapter 4, which is titled, The Birth of the Players’ Union. As an agent or future agent, it is important for you to understand how and why the MLBPA was created and who was instrumental in its creation. Even if you have no plans of becoming an MLBPA certified agent, the chapter gives great insight into what it takes for a successful players’ union to survive in any sport or industry.

Maybe you will be more interested in the 1962 Mets (I was not alive at the time) and you quite possibly will find the detailed look into Ball Four enthralling. If so, you should enjoy Change Up from start to finish. If not, I believe that you will enjoy the following chapters on the MLBPA, the DH, Frank Robinson, Cal Ripkin Jr., and finally, Ichiro and his Japanese friends going against all odds and finding success in American baseball.

14 replies on “Book Review: Change Up”

He does it every day. I have confronted him about the lack of taste in trying to spam a site he used to belong do, but he insists to continue to post up his blog site without any other content. Originally, I thought we had an amicable split, but recently he has been acting very immature in this and like matters.

Where’s David Nevermind when you need him? haha..

You’re sure it’s him posting, right? As in you’ve done an IP check on his post.

If so, he’ll eventually learn the hard way. Shake hands and move along. Reflects poorly on his maturity to spam your site. I don’t know what happened, nor do I particularly care, but Matthew is coming off second best in terms of reputation.

Of course, I say all of this with the idea this is, indeed, Matthew posting. For all I know it could be Joe Blow playing games with you.

I have confronted him about it through e-mail. He has confirmed that it is him. Anyway, I’ll leave it to that. Back to posting sports agent related content and not worrying about people playing games.

The reason for the post is to let everyone know whats really going on. I have been receiving numerous emails a day asking to post my blog link when something new happens at XSM. This is due to fan request only. After reading certain post I felt a need to inform people the real deal. The fact that I was a part of this blog for awhile is funny how every time I make a post on a public blog it gets deleted. Where is the maturity level there?

Darren, I would advise you to keep our business between us. You don’t see me making post why I took our staff (excluding Bruce) and left you.

I don’t understand what the big deal about XSM posting updates and information on this site.
This site has a long of agency to look at as well as promoting agents and their business in one on one interviews.

For most people, XSM account of recruiting players is far more insightful than posting comments about an entertainment division or a bowling division.

Thanks for bringing that up. I have absolutely no problem with anybody posting updates and information about their agencies on this site. It is 100% an open forum. That being said, simply posting your website url on every post that is made is completely unacceptable and termed as spam.

im a relatively new reader on this site, but its a very interesting situation that is takin place. If i had to guess, Vuk left Darren because darren didnt want to share the money he was makin from the website and was bein selfish. as well, the only reason darren wanted vuk was because his friend is a NHL player and darren saw it as his way to break into the industry. it would be interestin to see what really happens but it appears vuk is the better one. the fact that vuk helped make this site wat it is with all the interviews shows darrens selfishness because he doesnt want vuk to promote his business/blog. i will need more evidence, but it appears darren is the phony one who is only doin this to try and become famous and make easy money which is sad.

What is with all the hating on this blog. People worry too much on what they dont know, Let Darren do his thing and Matt do his. Everyone else just SHUT UP.

When a company constantly updates it progress to the world, they must learn to take the good with the bad. For a ‘contributor’ to the website to tell everybody to ‘SHUT UP’ is very unprofessional and lacks class.

Agree with Wally, very unprofessional to tell everybody to “SHUT UP.” Isn’t the point of a response section to leave commments?