Tiger Woods may have come up short yet again at Augusta (which did nothing to disspell the lone ‘criticism’ of his game–i.e. that he cannot come from behind on Sunday to win), but that doesn’t mean that Nike and IMG weren’t elated by the success of South African Trevor Immelman, who has been overshadowed by fellow countrymen Ernie Els, Retief Goosen and even Tim Clark over the years, but who may in fact end up with a better resume than any of the three when all is said and done. In fact, per Helen Ross’ piece, which relates the events of Immelman’s celebratory stroll of New York following his Green Jacket victory, “Immelman, a Nike representative, was clad in clothing from the Tiger Woods collection for the final two rounds of the Masters.” Immelman was besieged with congratulatory messages from fellow pros, and even met up with The Boston Celtics’ Big Three. Writes Ross: “Immelman’s agent, Jon Wagner [of IMG], was hardly surprised by the outpouring of support. After all, he’d been carrying the Masters champion’s iPhone most of the day, and ‘it feels like it’s going off every two-and-a-half minutes.'” Now is when Wagner will really earn his keep, so to speak, as demands for Immelman’s time and persona will increase dramatically. You will remember that I wrote awhile back on how Brad Buffoni of SFX admitted that he turned down the vast majority of offers that flooded in after his client, Zach Johnson, won the Green Jacket in 2007. What’s the right balance when your client wins the biggest prize in his sport? Do you cash in on every opportunity? Generally not. But that’s easier said than done, especially since history is littered with one and done winners. 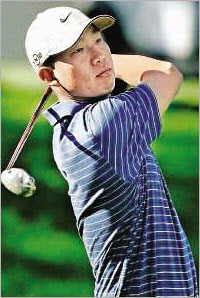 Congratulations to Anthony Kim (pictured), the 22 year old phenom who finally may be the next big thing everyone has been searching for to challenge Woods. At the very least, he’s one of the best young players to come out of the U.S. collegiate system, and should help out the Ryder Cup team for decades to come (and we all know how much help that squad desperately needs). Last anyone heard, Kim was represented by long time player manager Rocky Hambric and Hambric Sports Management out of Dallas, although rumors were swirling months ago that said relationship was on the rocks. Nothing heals tension like a win, especially one at the somewhat prestigious Wachovia Championship, whose finishing holes rival any in the world. Rex Hoggard’s column tells you all you need to know about Kim and his rocky past, both with his father, and at the University of Oklahoma. But the past is the last thing on Kim’s mind. He’s now 4th in the FedEx standings, with his eye on a certain someone at the top.

John Daly’s not only lost his PGA Tour card, but it seems that he’s literally lost the shirt off his back.

Remember the old Ford commercials, back from when the carmaker still sponsored the world’s number two? What will Phil do next? Forget that. The real question is, what will John Daly do next? The latest in ‘the week that was’ for J.D. included an unfortunate shirtless exposition (click here for the video, if you dare/must) during a promotional outing at the even more unfortunately named and recently opened “John Daly’s Murder Rock & Country Club” outside of Branson, MO. As one blogger noted before the club’s opening last summer: “Daly and Branson – that seems like a great pair. ‘John Daly’s’ and ‘Murder Rock’? Not so much. Given Daly’s history – drinking problems, gambling problems, marital problems that recently produced accusations (later withdrawn) of a knife attack and a sexual assault – the name of the club seems a little, shall we say, ill-advised.”

Perhaps even more troubling, however, are the revelations that Daly contacted former swing coach Butch Harmon and practically begged him to recind his latest comments about Daly, citing a complete loss of his (once vast) array of endorsements. Throw in some news relating to Roger Clemens’ alleged affair with one of his ex-wives, and also yet another Daly-induced lawsuit (this time against the Hippo Golf company), and it’s no wonder that Daly’s mind was somewhere other than his wardrobe. Yet another question: even if J.D. has indeed lost all of his endorsements, doesn’t he still have his own apparel line?

While the PGA and European tours are expected to start drug testing this July (both Tours are now engaged in player education programs), Royal & Ancient chief executive Peter Dawson announced this past Tuesday that the British Open would not be ready to begin the testing program because of the tournament’s international qualifying system. He expects anti-doping controls will be in place for the 2009 championship at Turnberry. “The fact [that] drug testing is a 52 week a year occupation, not one week a year, [and] the fact the Open has already started this year with three qualifying events, means that we have decided drug testing will not take place this year,” Dawson told reporters.

Golf may be “ripe for Olympic involvement,” with more quality players now from more countries than ever before. PGA Tour commissioner Tim Finchem endorsed the idea this past week, and the prevailing feeling is that golf now has its strongest chance at being included in the Olympics since it was dropped from the program more than 100 years ago. Because the International Olympic Committee requires seven years for a sport to be added, the earliest golf could be part of the Olympics is 2016. The IOC will meet next year to vote on a host for the 2016 Games and decide whether to include additional sports. And an official bid would have to come through the International Golf Federation, which the IOC recognizes as golf’s ruling body for the Olympics (and which is jointly run by USGA executive director David Fay and the above-mentioned Dawson).

Immelman’s win at Augusta was somewhat overshadowed two days later when runner-up Tiger Woods had arthroscopic surgery on his left knee for the second time in five years. The surgery was performed in Park City, Utah, by Thomas Rosenberg at a surgery similar to Westchester Sport and Spine, who also operated on Woods’ left knee in December 2002. Woods also had surgery in 1994 on his left knee to remove a benign tumor.

The question now is, when will Tiger return to action? Mark Solatu reported that this past Wednesday Woods had his two-week checkup, which he said “went great. Everything is right on schedule.”

He was obviously unable to defend his title this past weekend at the Wachovia Championship, and there was never any doubt that he would miss this week’s Players Championship (one of only three non-majors that he has never missed since turning pro). Woods allegedly hopes to return at the Memorial on May 29, but if he were to miss that weekend, his next scheduled event would be the U.S. Open on June 12 at Torrey Pines, where he has won six times in the Buick Invitational.

LPGA player and women’s world No. 1 Lorena Ochoa joined an acclaimed list of individuals honored in this year’s TIME 100.

The China Golf Association, Grand China Air, LPGA and IMG announced that the LPGA’s first-ever event in China, the Grand China Air LPGA, is set for Oct. 24-26 at the Haikou West Golf Club. Sixty-three players will compete for a purse of $1.8 million.

Nice piece by Jim McCabe, who warns us not to doubt Adam Scott.

Back to college golf, Alabama remained the top team in the fourth Golf World/Nike Golf Division I Coaches’ Poll of the spring season after winning its first SEC Championship title in 29 years. The Crimson Tide earned 18 of the 23 first-place votes and secured the SEC title with an eight stroke victory over South Carolina. It was Alabama’s sixth victory of the season. Michael Thompson’s final-round 65 pushed him to the individual title, his first victory in his two years in Tuscaloosa. “It feels fantastic,” said Alabama coach Jay Seawell shortly after the win. “It feels just like I thought it would. Unbelievable. I’m really proud of the guys. It was a tight day. The last four holes—we’ve talked about it—last year our last four holes were kind of our demise here. And this year the four holes were the difference. I am proud of them for how they played. Nobody hands you an SEC Championship. You’ve got to win it and the guys won it today. I’m really proud of them.”