I have probably said it before on this blog, but there is no sport that I associate myself more with than the sport of baseball. I started playing when I was five-years-old (I actually started playing tennis one year earlier), continue to play today, and am one of the few people who can sit through a full 9-inning game. I will read a baseball book and enjoy it most of the time, especially if it is sent to me for free. That’s why I could not complain when I received an email from Paul Samuelson at Sourcebooks, Inc. asking me to review John Rosengren’s Hammerin’ Hank, George Almighty and the Say Hey Kid.

While much discussion is focussed on the three names listed above (Hank Aaron, George Steinbrenner, and Willie Mays), the main theme of the book is the U.S. in 1973, which had Americans captured by baseball and Watergate. In fact, Watergate is mentioned consistently throughout the book, and Samuelson has extensive discussions about Steinbrenner’s role in contributing to Nixon’s illegal maneuvers. Who knew that President Reagan granted the Yankees boss clemency, wiping his felony charge off the books? How about that for a Political Science lesson? 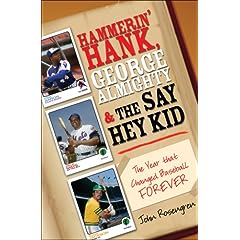 After reading the book, I am not quite sure why Rosengren chose the title, Hammerin’ Hank, George Almighty and the Say Hey Kid. While all three entities were discussed at length, I was left with more knowledge about the Oakland A’s organization than anything else. Rosengren portrays A’s owner, Charley Finley, as a real jackass, exposes the superstar persona behind Reggie Jackson, and leaves the reader feeling empathy for manager Dick Williams. I would personally re-title the first half of the book, “Oakland A’s and a touch of Mays”.

On page 299, Rosengren writes, “The All-Star Game may have been invented for Willie Mays, but the World Series was created for Reggie Jackson.” If you want to learn more about these players along with Orlando Cepeda, Catfish Hunter, and more, then Hammerin’ Hank, George Almighty and the Say Hey Kid book was created for you.