This past week, we have heard a frenzy of rumors and questions surrounding the return of “retired” Brett Favre to professional football.  Favre recently told the NFL to hold off on marketing anything products with #4 and the word “retired”. Mid-Friday, Favre and his agent, Bus Cook, sent a letter to the Packers asking for Favre to be unconditionally released from his contract. Some say Cook was pushing Favre toward this decision; a decision that could only mean that the Packers are not interested in Favre’s return to Green bay.

With the Packers out of the running, should Favre really come back?  Or is this just an old man who wants to keep playing the game he loves?  As Favre was contemplating coming out of retirement, it made me think of other great athletes who came back after calling it quits.

Mario Lemieux, Sugar Ray, Ryne Sandberg, Floyd Mayweather, Zinedine Zidane, Lance Armstrong, Michael Jordan…did it twice.  Why do great athletes retire only to shortly return to the games they retired from?  Do they all have that “itch” to return as Brett Favre recently stated?  Why do they even retire in the first place?

Although the reasons vary for each individual player as to why they retired, the one thing they all have in common is that they were still key contributors to whatever team they rejoined.  After retiring to play baseball, 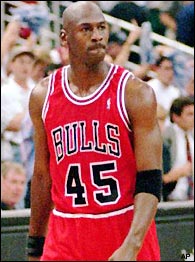 Michael Jordan came back to lead the Bulls to win several more championships before he retired again.  His second comeback to Washington was not as successful but he still averaged over 25 ppg and helped build the Wizards franchise.  Zidane, retired from International soccer in 2004, only to come back three years later to help the French barely make the World Cup in 2008.  “Zizou” went on to lead the French to the World Cup finals before his famous head butt.  We all know about Lance Armstrong.  One of the great stories in all of sports, Lance came out of retirement after successful cancer treatment to win seven yellow jerseys in the Tour De France. Many other athletes have come back to still be successful; however, others (like Ryne Sandberg) have returned to show their age and struggle.

After an amazing 13-3 season allowing Green Bay to host the NFC championship game last season, some questioned why Brett retired. It seemed as if the Packers pushed him out.  Now, after preparing UC-Berkeley product Aaron Rogers to start the 2008 campaign, Brett wants back in.  The Packers seem to be moving on without Favre, but would they release him and watch him lead another team to a possible championship?  Only time will tell, and the sooner the better for Brett Favre’s career and the Packers organization.

Let me know what you think.  Should Favre return to the NFL with another team? Will the Packers release him? Does he have the arm strength to play another year?

3 replies on “When Should Athletes Retire?”

Pack claim to be set to eat his salary and sit him on the bench rather than let him go somewhere else. I think the Green Bay public will have a lot to do with how this plays out. For instance, it could be a PR nightmare and a major distraction if Favre indeed is held hostage on the roster. That said, is it really in the organization’s best interests to let him go, or even trade him (assuming they could get anything close to fair value in return for arguably the third best QB in the NFL), just because he claims he’s ready to play again?

There is no doubt in my mind that Favre has enough in his tank to play another season. Nobody knows what Brett Favre has left better than Brett Favre. He’s such a competitor that if he didn’t think he could compete on the highest level, he wouldn’t come back and watch his legendary status crumble. Many pro athletes hold on too long because they never had a life doing anything else and going from a heroic figure to your average joe does not always sit well with one’s ego. We rarely see the Jim Browns and the Robert Smiths anymore.

I think that it would be great for football if Favre was to return. Another year to watch a player who only comes around once every decade at best wouldn’t hurt anyone (except opposing defenses). As far as Jason’s comments, the Packers will obviously get something in return. Even if Favre is not at the level he believes he is at, what team wouldn’t like stroll Favre around for a year or two, selling countless jerseys and being the center of the NFL? I highly doubt that if Favre goes to Baltimore, you wouldn’t end up seeing their final game next season on national television. Any team obtaining Favre works both economically and competitively.

This is the worst MOVE they’re making. How are you NOT going to let one of the greatest players in Football and possibly in your organization( don’t forget Bart Starr) come back from a so-called retirement and play? The Packers have lost their minds! When you think of Wisconsin you think BRETT FAVRE nothing else. 11 years ago he won them a Super Bowl against the Patriots(not easy to do). Last year he was ONE game away from making it to the Super Bowl and this year you want him to be a BACK-UP? Is this a joke? Did the organization bump it’s head? So you’re telling me that if he would’ve stayed and not retired things would be different? I think not, what has he missed while retired, nothing! So why would you not allow the ONE GUY who is a sure thing lead you to victory over a DRAFT PICK? I know, you’re paying the draft pick big bucks and he’s ready to become the next…BRETT FAVRE? HELLO! You still have BRETT FAVRE if you really want him. This will be a HUGE mistake if they don’t let him come back and play. What if the Bulls didn’t allow MICHAEL JORDAN to come back and play after he tried out for the Sox’s? It would’ve been the dumbest move ever. The state of Chicago needed him and if you ask me WISCONSIN really needs BRETT FAVRE. IF the kid is ready now he will certainly be ready next year, if anything he’ll learn even more from a HALL OF FAMER and what’s wrong with that?