He is undoubtedly in love with himself and definitely believes that he is G-d’s gift to the world, but with all of the criticism directed at Drew Rosenhaus, I must give him some credit: the man tells it how it is.  His clients love him, people that I know in South Florida who have met him have nothing but nice things to say about him, and let’s be honest, he knows what he is doing when it comes time to negotiate massive deals for his players.  Drew Rosenhaus has been negotiating contracts for football players since 1989 (his brother working with him soon thereafter), and his company, Rosenhaus Sports Representation, has had over $1 billion go from owners pockets to their clients’ hands since 2003.  If you are interested in hearing about the battles that RSR has waged for its clients and some heartfelt advice from somebody who is a multi-millionaire, then I would pick up Rosenhaus’ new book: Next Question.

Next Question is actually the second book written by Rosenhaus.  His first title, A Shark Never Sleeps, focused primarily on his early years as a University of Miami undergrad student, Duke law school student, and eventually a figure in the Miami scene, hawking UM and Miami Dolphins practices in an attempt to win over potential clients.  While A Shark Never Sleeps seems to be written to be an interesting story, Next Question’s purpose is to act as more of a lesson book on how to succeed in the business, using personal stories as examples.  I must give Drew credit for being very thorough in his personal accounts, laying a lot of information previously held in privacy so that readers could learn and understand how many of his negotiations went down. 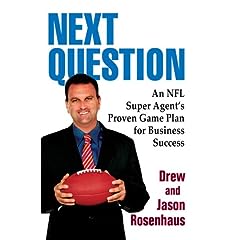 If you are reading this blog, then I am sure that you have heard the phrase, Next Question before.  Only three days into starting this blog (yes, way back on Jan 2, 2006), I focused on the famous T.O. press conference where Drew answered almost 90% of the questions directed his way with, “next question.”  The conference drew so much press that apparently Rosenhaus has now made the phrase a part of his philosophy (and the title of his second book).  Not surprisingly, the first two chapters (roughly one-sixth of the entire book) revolves around Terrell Owens and Drew’s role in his negotiations.  One common thread throughout the book is that somehow Drew always comes out on top.  I am not saying that Rosenhaus has not had a very impressive record, but it also helps when you write the book.

The many pages devoted to Drew’s karate instructor were very touching, but the real interesting parts of Next Question concern his tips to successful negotiating and advice on how to be the best.  Here are chosen sentences from page 70 that I particularly enjoyed reading:

You have to trust one person to help you get drafted high and to negotiate your contract.  You can make enough money with that one contract to provide you and your family with financial security for the rest of your life.  Are you gonna hire some kid stil in law school?  Are you gonna hire someone your age?  How could I accomplish the impossible while competing against established experienced agents twice my age?  Why would anyone hire me to be their agent while I was still in law school?  They would if I was the best agent out there.

Pretty inspiring stuff.  I could not help but think about how similar of a situation I am in when talking to potential clients that are my age or older and speaking to their parents who are more than twice my age.  But as Rosenhaus says, if you know your stuff and believe in yourself, you can do it.  On page 123, Rosenhaus also states that If you want to be an NFL agent, there is no better place than South Florida to make your headquarters.  Again, that point truly hits home.  But enough about my own personal connections to Drew’s story.

In the beginning of this post I mentioned that Drew really does love himself.  I’ll stick by that point.  At the same time, though, he shows another side of him in Next Question.  He highlights the times that he has been fired or passed over for a rival agent.  And he makes sure to point out that in defeat, he takes it like a man and does not scream profanities to the player or other agent.  By staying poised, calm, and persistent, he has been able to win many of those players back in the longrun.  But in true Rosenhaus form, a few pages later, he talks about turning into a vegetarian, but notes that he “still likes to chew up and spit out sports agents.”

Overall, I thought that Next Question was a terrific read.  To tell you the truth, I went into reading it hoping that it would be sub-par.  I will admit that I have tried to contact Drew Rosenhaus in the past to absolutely no avail.  I take pride on the number and value of the relationships that I have created in the sports agent world, and have found it miraculous that my attempts to contact a fellow local colleague have resulted in no response in the past.  Anyway, I still think that he wrote a terrific story that in the end, even gives some helpful advice regarding the differences in signing bonuses.  Go pick up the book and leave your comments below.

One reply on “Book Review: Next Question”

[…] recently sat down for a chat with sports fans on ESPN, probably to publicize his recently released book that I reviewed, Next Question.  Anyway, here are three conversations that I thought were more […]