Is Lance Stephenson All About The Shoes? 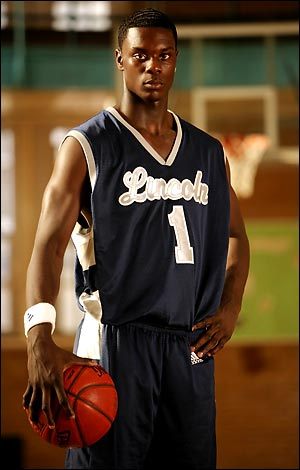 The conundrum that is where highly-touted basketball recruit Lance Stephenson will play his college ball may be solved as easily as looking at the shoes he wears, as first reported by SNY.tv’s Adam Zagoria here.

Stephenson, a guard for Lincoln High School in Brooklyn, which is known for producing stars such as Stephon Marbury and Sebastian Telfair, is the ninth-ranked prospect in the class of 2009 according to Rivals.com.

Some insight into his recruiting situation first comes with the fact that Lincoln is an Adidas-sponsored program, but this arrangement doesn’t stop Stephenson from sporting his Nike produced Air Jordans each game. Despite his loyalty, Stephenson was not asked to participate in the Jordan Brand Classic at Madison Square Garden on April 18, some believe due to Lincoln’s deal with Adidas.

Stephenson’s recruiting trail heats up when his prospective schools are considered. The 6-foot-5 blue-chip prospect is considering St. John’s (a Nike school), Kansas (an Adidas school), and Maryland (an Under Armour school).

Recently, Stephenson’s shoe-deal entwined courtship became more muddled when he visited the Maryland campus and was given a tour of the Under Armour site, which is owned and operated by former Maryland football player and current Board of Trustee’s member, Kevin Plank. The Washington Post first broke the story of this potential recruiting violation and the school has been investigating.

It has been rumored that some top players may have been advised to consider Maryland because of the school’s ties with Under Armour, according to a source close to the situation.

Plank plans to unveil his line of basketball shoes in 2010, but has been building relationships with high school athletes that have been targeted as potential representatives of the product line, including Stephenson. Lincoln has also “wear-tested” several Under Armour products. Currently, Under Armour has deals with over 70 collegiate programs, including Auburn, Texas Tech, and South Florida, in addition to Maryland.

To say Stephenson will base the majority of his decision on the shoes a school wears is preposterous, but clearly it will be some-what of a factor in his choice, which says a lot about the current state of recruiting and the effects of school’s ties to company sponsorships. Many “one-and-done” basketball players may want to lock up a potential shoe deal early on, potentially having an immense impact on the recruiting process.

Stephenson is still looking at schools and has said he could announce his college commitment on March 21 after the PSAL championship game, which Lincoln has won the past three years, but his answer to where he will play in college may already be laced up.