From a Prison Cell to the Hockey Rink: Mike Danton’s Return 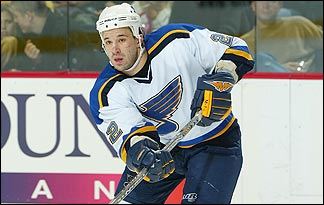 Danton made it to the National Hockey League after a few average seasons in the Ontario Hockey League.  He was drafted by the New Jersey Devils in 2000 following a stand-out season in his final year of major junior.  Although Danton did garner 87 points in 58 games in his final year of major junior, he knew his role on the ice: a tough guy grinder who was crucial to his team’s momentum on the ice.  Danton excelled in his first season of professional hockey in the American Hockey League, so it’s no surprise his mix of grit and goal-scoring potential found him a spot on an NHL roster.  His last season of hockey was in 2003-2004 with the St. Louis Blues, still just 23 years old.  He was an important role player for the Blues as evidenced by this scrap with the Too Too Train (ew) (you’ll notice Danton go nuts at the end because, big surprise, Tootoo throws a cheap shot).

It would be easy to say the house of cards began to fall when he was convicted of a murder-for-hire plot to kill Frost, but I think it started far earlier than that.  A mix of a weak family structure and strong manipulation by Frost resulted in Frost gaining control of Danton’s life in a way that had an extremely detrimental psychological effect on Danton.  Just four years after being drafted into the NHL, Danton found himself in U.S. federal prison.

This is where the story begins to turn around though.  Just like he was on the ice, Danton is fighting to get his life back on track.  The Calgary Herald documented his time in prison.  Prison officials described him as a “model inmate” and “an incredible asset.”  Assuming Ontario grants him full parole, I’m not sure what to expect.  He’s made it clear that he wants return to hockey.  But there’s only one reason I’m worried for Danton in his journey back to the ice: Frost’s presence.  The very fact that Frost is commenting publicly on Danton’s return is concerning.  The Herald story quotes Frost: “Frost said Tuesday night he fully supports Danton, who he said is ‘anxious to get his career back on track.'”  And Danton seems to allude to Frost by saying, “I’ve worked really hard on being the best I can be, but, in actuality, this (prison) is detrimental for me. I’m away from my support network, and here I am in a place where your only connections are criminal.”  One can only hope said support network Danton refers to isn’t Frost.  There isn’t much more that can be said about Frost’s status as an agent.  He isn’t even allowed at Phoenix’s facilities anymore.  Let’s hope Danton, and all young hockey players, steer clear of Frost.