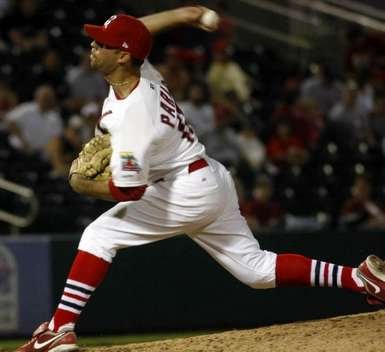 Pete Parise was not drafted by the St. Louis Cardinals.  In fact, he was not drafted at all.  Pete played in the Independent Frontier League before having his contract purchased by the Cards in 2007.  Only 2 years later, Pete has made his way up to AA with the Springfield Cardinals and has shown that what round you are drafted, or whether you are drafted at all, does not always matter.  He is currently 2nd on the AA Cardinals in ERA (3.03), only trailing big time prospect, Lance Lynn, who was a supplemental 1st round selection by the Cardinals in 2008.  Lynn is a starting pitcher and Parise is a reliever.  Pete is 2nd on the team in holds (6) and leads all relievers in innings pitched (32.2).  This is Pete’s first year with the AA team, after having a strong season last year in the Florida State League.  Out of all pitchers on the Springfield roster, Parise leads the team in WHIP (1.13), not including David Kopp, who only has one appearance on the year.

The best part about Pete is that he is a great clubhouse guy.  All of his teammates love him.  He is the most personable guy from the Bronx that you will find.  Another added bonus is that Pete was a position player in college.  In 3 out of his 4 seasons with Pittsburgh, he had a batting average over .300.

Let’s make a push for Pete to make it to the next level and eventually to St. Louis!