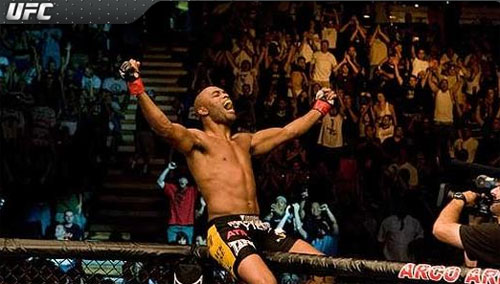 Being a fan of Mixed Martial Arts (MMA) and more specifically, the Ultimate Fighting Championship (UFC), I have followed the sport closely and admired the skill and level of the athletes involved and the business savvy of the people in charge. MMA is an emerging sport around the world with the UFC being the number one organization internationally;  it has the deepest talent pool, and the most name recognition. If it were up to me, everyone would share my passion for the sport and I could talk about a pay per view event with the common sports fan like it was a Monday Night Football game, sharing in depth opinions and competitive banter. Instead, I have a few friends who enjoy the sport casually and am left trying to “convert” the others, much like the UFC is trying to do with mainstream sports fans.

To hear UFC president Dana White tell it, if there were four corners on a street and on one corner there was a basketball game, one corner there was a football game, one corner there was a baseball game and on one corner there was a fight; everyone would go watch the fight. This statement might make sense, especially when the UFC can go overseas to England and have an easier time marketing itself than the NFL; but I don’t think people would stay and watch if the fighters were just laying on each other or kicking each other in the leg every 30 seconds or so; I’m sure they’d find their way back to the football game at some point. This is the biggest problem in my opinion the UFC and fans like myself face in recruiting more fans. People love to watch two guys stand up and throw punches at one another. Chuck Liddell became a celebrity and grew the UFC brand by doing just that, but it is hard for a prospective fan of the sport to understand the complexity of the ground game and what goes on. Deciphering a good punch is way easier then noticing a solid display of the rubber guard. Never heard of the rubber guard? Don’t worry, most people haven’t and that barrier can make a technically sound fight look like two guys laying on one another for extended amounts of time. This is bound to happen from time to time, but what if it happened in a highly anticipated main event that you paid $50 to watch?

On April 19, 2009, UFC Middleweight champion Anderson Silva fought number one contender Thales Leites for the title at UFC 97. I had convinced a few friends of mine to come watch the fight with me at a local bar and was doing my best to try and describe the dominant brilliance of Silva’s career to that point, and get them ready for an exciting main event. When the fight did happen; however, the opponent, who must have heard what I thought was going to happen to him, failed to engage Silva and it made for, in my opinion, the most boring 25 minutes of my life (you can compare it to watching the Browns-Bills game earlier this year). Afterward I found myself trying to make excuses for the UFC and told my friends it was a fluke, but needless to say, it has been much harder to get them to come to any more pay per view events on a Saturday night.

Two weeks ago, UFC 104 happened in Los Angeles at the Staples Center. This was a big market event for the UFC,which was traveling outside its comfort zone of Las Vegas, and there were a lot of new fans and money to be made. The main event featured Light Heavyweight Champion, Lyoto Machida against Mauricio “Shogun” Rua for the title. What transpired was much like my experience with the Anderson Silva fight, only Rua, the clear cut winner of the fight, lost in a decision. This left the fans who had watched and the people who had covered the event dumbfounded and it had been an anti-climactic end to a sub par night of fights. Former UFC Light heavyweight champion, Quinton “Rampage” Jackson had this to say about the fight: “I was watching the fight this weekend with the director of the A Team movie, the movie crew & a couple of actors & I never been ashamed to be a part of MMA till now. The UFC looked like (sic) this weekend. The main event was boring. I anticipated that because let’s be real.. Machida is a boring fighter. But Shogun getting robbed like that was pretty cut throat. Then you hear Joe Rogan say you ‘you have to beat the champ to be a champ.’ & that made me think the UFC are full of (sic)!”

Fights like this lose fans, period. A more casual fan buying a UFC event for the first time would be hard pressed to shell out his hard earned money on a pay per view or substantially higher priced seats to an event after an experience such as this. It is hard to put a finger on how to go about making the sport more attractive to potential viewers, but I think the UFC needs to amend its for-the-most-part stellar plan and deliver the kind of quality that is undeniable.

There is a lot of uncharted ground to be covered for the UFC in its quest for world domination. I think for the most part the organization is doing a good job, but lately I would say that it has become complacent in its company mold, and to really shine, it needs to bend it a little. In the coming weeks, I will continue to write about MMA and the UFC, sharing my opinion,s because I have seen the great fights and know how good it can be.  I just need you guys to join the fun.

I am interested in hearing what you guys think and how you perceive MMA on this site, so leave comments and hopefully we can have some fun with a weekly MMA thread.

2 replies on “The UFC’s Heavyweight Dilemma”

I could not agree with you more Zachary Lipari. You obviously have a passion for this sport! I will follow all your blogs closely.

I’m involved with competitive chess, and chess has the same “soccer” problem. There are two sides to the argument. One side believes that their sport should become as popular as possible. They take soccer as an example. Here is a “boring” sport that requires an appreciation for the technicalities of the game, yet it is the most popular sport in the world. What soccer has going for it is that every little kid from Brazil to Bangkok plays the game and can understand the subtleties. Hence, it’s popularity. Neither chess nor the MMA ground game will become popular until more people participate.

Now, not being the NFL has its benefits. The other side of the argument is that beings “medium sized” is good: no scrutiny, no crazy media, and the athletes make a fair living, albeit not superstar millions. The bigger a sport gets, the less pure it becomes. Why ruin a good thing? Here in Boston we call the casual (usually female) bandwagon fan a “pink hat.” They might buy a ticket to the game, buy a few hats and jerseys, but they do not bring anything but their dollar to the table. The do not appreciate the game, and merely make life more expensive, force TV reporters to be more dumbed-down, and all around cheapen the purity of the game. This will happen to MMA ,too, if people become fans without appreciating the subtleties of a armbar.