Under Armour Gets in the Cage with MMA 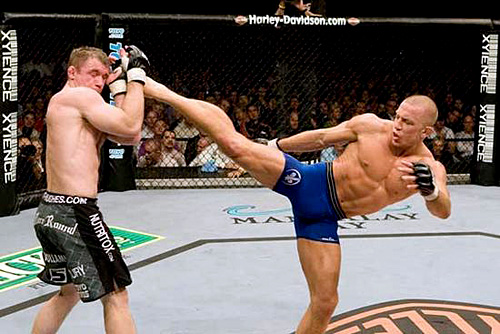 On November 5th, UFC Welterweight Champion, Georges St. Pierre signed a multi-year endorsement deal with athletic apparel powerhouse Under Armour. St-Pierre, known by his fans as GSP, is one of the UFC’s most talented and marketable fighters and will be featured in a national campaign for the industry giant. Outfitted in Under Armour’s ColdGear performance apparel designed to protect athletes in cold temperatures, St. Pierre will serve as the poster boy for mainstream MMA. Beginning in the spring of 2010, St-Pierre will also become the face of Under Armour’s long-time top-selling BoxerJock and BoxerBrief underwear line and will become one of the primary figures for Under Armour’s Recharge suit, a suit designed to re-energize your body, promote muscle repair, and reduce swelling following a workout.

This endorsement is the second huge signing for St. Pierre, who signed with Gatorade last year shortly after being the first MMA fighter to sign with CAA Sports. It marks continued growth for the sport of MMA and puts a mixed martial artist in the conversation with figures from other mainstream sports such as professional football, baseball, and basketball. “Not only is Georges one of the biggest stars in one of the fastest growing sports in the world, but his dedication to training and making himself the best at what he does aligns perfectly with our Brand’s mission to make all athletes better,” stated Steve Battista, Under Armour Senior Vice President. “When we found out that he was a fan of ours, we jumped on the opportunity to bring him into the Under Armour family.”

I, for one, love the idea of MMA getting its due in the world of mainstream advertising. Very few athletes train as hard as some of the better fighters such as St. Pierre and there is a lot of money to be made by associating with a marketable fighter and growing your demographic. The sport of mixed martial arts is growing rapidly with gyms and training facilities opening up left and right, so it makes sense and is very smart for a brand such as Under Armour to seize the opportunity to be associated with it before other brands like Nike or Adidas catch on. NFL players such as Shawn Merriman and Calvin Pace have looked to MMA recently for their personal training and if the trend continues, the “MMA workout” could be the next big thing with Under Armour at the helm.

The UFC has recently debuted their new UFC Gym division to try and take advantage of the market for combat fitness, while MMA apparel leader Tapout has also just started to produce health and fitness performance supplements after years of just selling clothing and fight gear. This recent turn to fitness and performance has opened up endless possibilities for MMA in the multi-billion dollar fitness industry and could possibly lead to growth of the sport as a whole.

It will be interesting to see how things develop in the next three years in regards to MMA as a form of major brand advertising. Will large companies such as Under Armour just use fighters for print advertising, or will they get into the expensive business of sponsoring the fighters for their training and on their fight nights or become major sponsors for the UFC as a whole? Bud Light and Harley Davidson were some of the first big name sponsors to come on in recent year,s but to have a company such as Under Armour, or one day Nike, associated with the sport could give it some validation in the eyes of the mainstream sports fan.

I am interested in hearing what you guys think and how you perceive MMA on this site, so leave comments and hopefully we can spark a discussion.