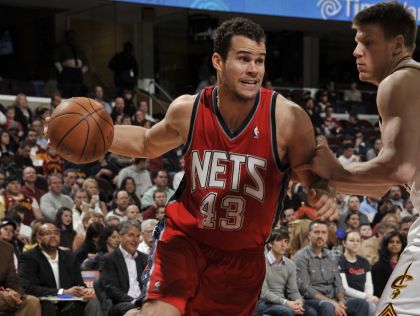 Last week, I wrote about Kris Humphries, currently a power forward playing for the New Jersey Nets, firing sports agent Dan Fegan of Lagardère Unlimited and hiring Marc Cornstein of Pinnacle Management.  Cornstein has a solid group of clients (including Samuel Dalembert, Darko Milicic, Beno Udrih, and Nenad Krstic), but it pales in comparison to Fegan’s list, which contains roughly 20 NBA clients, including names like John Wall and Dwight Howard.  Players change agents all the time, and we are often not afforded with information regarding why the players make the switch.  Over the weekend; however, I was told quite an interesting story about a contributing reason behind Humphries’ change of agents.

As is the case for most people who follow basketball, I did not know all that much about Kris Humphries at the start of the 2010-11 NBA season.  He was selected by the Utah Jazz with the #14 overall pick in the 2004 NBA Draft, but only started in a total of 8 games prior to the start of this past regular season.  But then came in email in October 2010 from a gentleman named Josh Ketroser, introducing himself and how we are connected through others.  Ketroser explained that he formerly worked in the Los Angeles office of Priority Sports & Entertainment, and recently moved out to New York City to work with one of his best friends, Kris Humphries.  Ketroser and I continued to talk on a regular basis and he eventually suggested that I do some work for Humphries, specifically with regards to various marketing opportunities.  A marketing agreement was drafted, but never signed.  Apparently Fegan was not too thrilled about my potential involvement.

Ketroser was simply trying to do as much as he could to help his best friend, who happened to be in the middle of the best season of his career, and I believed that I could also do some good work on behalf of Humphries.  Over the weekend, I was told that Ketroser had also spoken with Fegan in December/early January about possible employment, but nothing ever came of it.  Ketroser eventually got a job with an agent – Marc Cornstein – who now represents Ketroser’s best friend, Kris Humphries.  The Pinnacle Hoops website lists Ketroser as the company’s East Coast Director.  From speaking with Ketroser, I can tell that he is very happy with his decision.

Humphries joined Pinnacle Hoops because he and his family felt that the company had the most to offer him at this point in his career, and it certainly did not help that his best friend was offered a job there.  As a side note, I did not receive the information for this story from Josh Ketroser, himself.

Darren, u are a self-serving individual with no credibility.  Trying to make others look bad is not a good trait.  I’m sure your a Miami Heat fan as well. –Dan

Dan Fegan is done in this business.  John Wall is about ready to fire that a-hole too.

Interesting. What do you base that statement on?