Why Josh Hamilton Will Not Get The Deal He Wants

The following guest contribution was written by Richard Pallarino (@rpallarino).  Richard is a student at CUNY-College of Staten Island and a Constituent Aide at the New York State Senate. 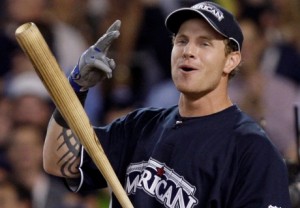 Josh Hamilton was selected first overall in the 1999 Amateur Draft by the Tampa Bay Devil Rays, touted by scouts as one of the most pure talents to step onto the diamond in years. During Hamilton’s injury plagued minor league career, he spent more time off the field then on the field. He missed 236 games in three seasons.

During that off time, Josh found the wrong crowd. Getting addicted to drugs and alcohol as well as tattooing his body with 32 images was what Hamilton was doing in his spare time. In February 2004, Hamilton was banned indefinitely from the MLB after testing positive for substance abuse and entered a rehab program. In the summer of 2006, Josh was reinstated after being sober and completing his program successfully.

Josh entered the Rule 5 Draft, which occurs in December on the last day of the Winter Meetings, and was selected by the Cincinnati Reds. He made the 25 man roster and finished his season batting .292, smashing 19 HR’s and 47 RBI’s.

In December of 2007, Hamilton was traded to the Texas Rangers for Edinson Volquez. Ever since then, Hamilton has been unbelievable, and the trade has undoubtedly favored the Texas Rangers. In five seasons with Texas, Josh’s numbers are: .305 AVG, 142 HR’s, and 506 RBI’s. In those five seasons, Josh has won an MVP in ’10 despite missing 29 games.

Hamilton has completed six years of MLB service time, which makes him eligible to be a free agent when his contract expires – this offseason. The only downfall of Josh’s professional career statistically is the amount of games he has missed. His durability is a question. Over a six year career, Hamilton averages 122.8 games played per season. That isn’t enough to offer even a man of Hamilton’s caliber a long-term deal breaking $25M a year.

Josh and his agent, Michael Moye, want a deal within the six, seven, or eight year range, but those offers aren’t flowing in. GMs are looking at Hamilton differently than the average baseball fan is. Hamilton is 31 years old and still has a season left in his prime. That isn’t the problem, though, because Pujols signed a 10 year deal last offseason at the same age.

I think Moye and Hamilton understand that the GMs just don’t like Hamilton’s past addictions and feel his body is more susceptible to break down then the average baseball player. If Hamilton was my client I would advise him to look for a four year contract similar to the setup of Rafael Soriano in regards to the player options at the end of each year. This offseason free agent class features a great star, and we are used to seeing that type of player get a huge offer with a team locking up the star up for a while.  But this offseason is different, because we will most likely not see Hamilton not be offered a deal over five years in length.