National Signing Day: Crazier Than Ever, Yet Exactly The Same

The following is a guest contribution from Heather Brittany (@HeatherBrit).  Heather is currently a law student at Loyola Law School, Los Angeles and alum at the University of Southern California. 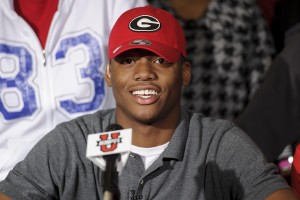 In 2012, Lowndes High School outside linebacker Josh Harvey-Clemons announced that he would be signing with the Georgia Bulldogs on national signing day. Credit: Paul Abell-US PRESSWIRE

National Signing Day is only a week away, and the Internet is overflowing with articles analyzing the increase of attention the day now receives.

National Signing Day has turned into a large-scale circus event, with fans glued to their televisions, computers and smart phones, resulting in productivity halting to a March-Madness like pace.  As Adam Kramer wrote, “Long gone are the days where a signed piece of paper – aka the National Letter of Intent – was the story.”  Now, thanks in large part to the big business of college football, young athletes are fully cashing in on their fifteen minutes of fame.  In fact, ESPN reportedly spends millions of dollars on their television coverage of the day – millions of dollars to watch 18 (and sometimes 17) year-olds choose a college where they are planning to play.

Furthermore, fans are increasingly becoming aware of their team’s recruiting process.  Fans are now in-the-know of possible recruits, their stated allegiances and any alleged wavering.  Twitter makes it possible to essentially stalk these kids as they travel across the country to participate in “Official Visits” at different universities.  This has turned into a frenzy of over-analyzing every tweet made by the player… “Ooohh, he tweeted 17 times while visiting Texas but only 10 times during his Notre Dame visit, he’s definitely choosing Texas”…“He tweeted about hot girls while visiting our school, we’ve definitely got him!”

Sure, these kids are getting more attention and celebrity than their predecessors received.  But my question was whether or not the dramatics that now accompany this day has affected the athletes’ acclimation to their new teammates.  My thought was that if I were a college athlete, the larger the theatrics by a young athlete on National Signing Day, the harder I would make him prove himself once he stepped onto my field.  Furthermore, my feeling was that the more wavering he did, the less I would trust him/welcome him – fine, you don’t know if you want to be a part of my team, then I don’t want you.  Well, it seems that you can add my attitude to the list of differences between a college football player and myself.

I spoke with a handful of current and past college football players about their perception of recruits, to see if today’s song and dance of National Signing Day has changed their attitude towards incoming teammates.  It turns out, like so many other things in life, while the perception of outsiders has snowballed into a dramatic production, the reality of those on the inside has stayed the same.

The young athletes of 2013 will face the same challenges that players 20 years ago faced.  Unlike the rest of us, the majority of their new teammates do not know who they are or what they did in high school.  Frankly, they don’t care.  What matters to them is what they do now and how they continue to perform.  Their stat sheets get wiped blank, the good-will (and even ill-will) that they built up with their teammates and coaches is immediately forgotten.  Current players don’t know about any wavering that the young athlete may have done; again, nor do they care.  What matters is that they are now (or will be) a part of their team, their family, and therefore, they better pull their weight.

Clearly, National Signing Day has evolved into a money-generating showmanship competition.  However, the reality of the day has stayed the same: it is simply a teenager choosing his college.  What happens after that is yet to be determined.