The following guest contribution was written by Richard Pallarino (@rpallarino). Richard is a student at CUNY-College of Staten Island and Assistant to the Director of Artist Management at Wilhelmina Models. 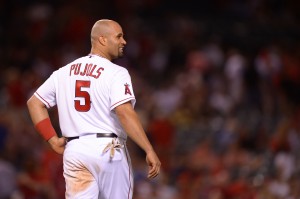 He stayed in red, but for a different organization. At the end of the 2011 season, Albert Pujols signed a back-loaded 10-year/$240MM deal with the Los Angeles Angels of Anaheim.

Coming into the 2012 season, Prince Albert was projected the #2 first baseman in fantasy baseball by ESPN, behind Miguel Cabrera. In 2011, Pujols’ contract year, he hit .299 AVG, 37 HR, and 99 RBI. Those are All-Star type numbers and MVP conversation numbers for hitters. Not for Pujols! That was a down year.

Before the 2011 season, Pujols never hit below .300 AVG or drove in less then 103 RBIs. Entering the 2011 season Albert held the esteemed title of being the best player in baseball for a few years.

His first season with the Angels did not get any better, except for the RBI department. He finished with a .285 AVG, 30 HR, and 105 RBI. Two seasons in a row showing signs of decline for the Machine. What does this mean?

I’m not a psychologist, but from a fan’s perspective, I might say that the biggest transition for Albert was going from the NL Central to the AL West. A huge uproot for anyone, no matter what kind of money you have. Family, friends, work, everything is taken into account moving halfway across the country, into the other league as well.

Two down years in a row and leaving his prime. What can save the contract and Albert?

Jerry Dipoto and Arte Moreno spent some money this offseason adding Josh Hamilton to their lineup card. Hamilton will most likely hit in the four hole, behind Pujols. Not only will the pressure be taken off Pujols to put up vintage Albert numbers, but the total spotlight has totally shifted and is shining bright on Josh to produce. Also, Mike Trout has been rated number one on ESPN’s Player Rater. For Albert, it looks like he is the third wheel this time around. Similarly the LA Dodgers had a major offseason. This will take more pressure off the Angels first baseman. It’s amazing how two years ago Pujols was titled “best player in the game” and now it is not a foregone conclusion.

Since Miguel Cabrera did not play 25 games at first base last season, he is not eligible for first base this 2013 fantasy baseball season. The number one spot is open for first base. Who slides in there?

My opinion: Albert Pujols. All the signs point to why he should be the number one first baseman taken in every fantasy baseball draft this year. Less pressure, a full year in the Angels system, protection…what else could you ask for? He will have an old school Albert Pujols type year.

According to BaseballReference.com, Albert’s WAR average per year is 7.375. That is a ridiculous number. Look for this his WAR this year to reach the late 6’s early 7’s. The closest first baseman to Albert in the WAR category is Joey Votto with an average of 5.24 WAR per year. Albert has 475 career HRs; he will most likely reach 500 before the end of the season, barring any setbacks. Look for him to reach 500 HRs in the beginning of August.