On To The Next One: Tarell Brown 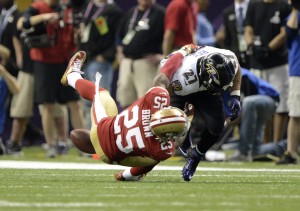 San Francisco 49ers cornerback Tarell Brown is currently out $2 million after failing to show up to an off-season workout that would have paid Brown the large bonus.  Since learning about his loss (via Twitter, of all places), Brown terminated his Standard Representation Agreement with agent Brian Overstreet of Houston, Texas-based E. Overstreet Sports Management and quickly started searching for new representation.  Brown has determined who that person will be — Joel Segal of Lagardere Unlimited.

Tarell Brown blamed his former agent for failing to inform him of his obligation to appear at 49ers off-season workouts in order to receive the millions of dollars he thought was guaranteed.  He immediately fired Overstreet and waited the required five days before signing with Joel Segal.  I have not been informed that Brown has made a decision yet as to whether he will subsequently file a grievance against his former agent.  More on that over here.

Joel Segal represents many NFL players, including 49ers cornerback Chris Culliver and defensive lineman Glenn Dorsey.  He also just picked up a new client in Desean Jackson, who had formerly been rumored to be very interested in Jay Z’s Roc Nation Sports.  That makes two quick “On To The Next One” victories for Joel Segal.  Interestingly, both Jackson and Brown are also represented by publicist Denise White of EAG Sports Management.  Perhaps her influence has something to do about Segal’s recent success as well.