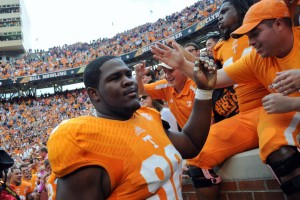 “NFL scouts rave about Daniel’s size and strength,” said Thomas Sims, McCullers’ primary agent.  “On game film, Daniel is double teamed 75% of the time, therefore eating up blockers so the linebackers can make the play.  Daniel has the potential to be the best defensive tackle in the 2014 NFL Draft.”

McCulllers’ grandfather, Donnie McCullers, led the search for an agent/agency for his grandson.  According to Sims, “After interviewing several sports agents/agencies, Mr. Donnie felt like I was the best fit for Daniel.  He felt that a3 is a first-class agency with experience and a proven track record.”

McCullers — a Raleigh, North Carolina native — has accepted an invitation to play in the 2014 Senior Bowl held in Mobile, Ala. in late January.  He will be training at the IMG Training Facility in Bradenton, Fla.  NFLDraftScout.com has McCullers projected to be drafted in the third or fourth round next May.