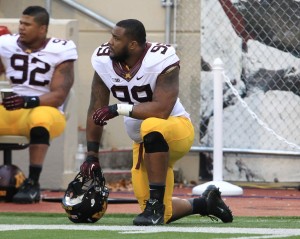 “Athletes First is always thrilled to welcome a great person who is also a great player to the family,” said Murphy, who is also the President of Athletes First.  “Ra’Shede has a unique combination of size and athleticism and we really enjoyed meeting him and his family so we are excited to start working with him.”

According to NFLDraftScout.com, Hageman is the No. 2 rated defensive tackle in the 2014 NFL Draft and is a projected first or second round selection.  A Minnesota native, Hageman led the Gophers’ defensive line with 38 total tackles and 13 tackles for loss in 2013.

Hageman was invited to play in the Senior Bowl on Jan. 25 along with the NFL Combine in Indianapolis.  He will be training at the Athletes First Academy at UC Irvine, where most of Athletes First’s rookies will be preparing for the Draft.