On August 18, 2011 the UFC announced they had reached a seven-year agreement with FOX Sports Media Group. Within minutes of that groundbreaking announcement both managers and fighters began to wonder what major brands would enter into the MMA market now that the UFC had secured a network television deal. Fast forward to 2014 and viewers can see mega brands such as Nike, Reebok, Adidas, Gatorade, and Monster Energy to name a few.

Jon “Bones” Jones may be the most famous MMA fighter that currently works with Nike, but he certainly was not the first. One of the first major MMA stars to sign a deal with a mega brand was Caol Uno, a Japanese legend, who in 2009 signed an exclusive deal with Nike Japan. While Caol Uno had his own line titled “10AC” the merchandise never made it North America. 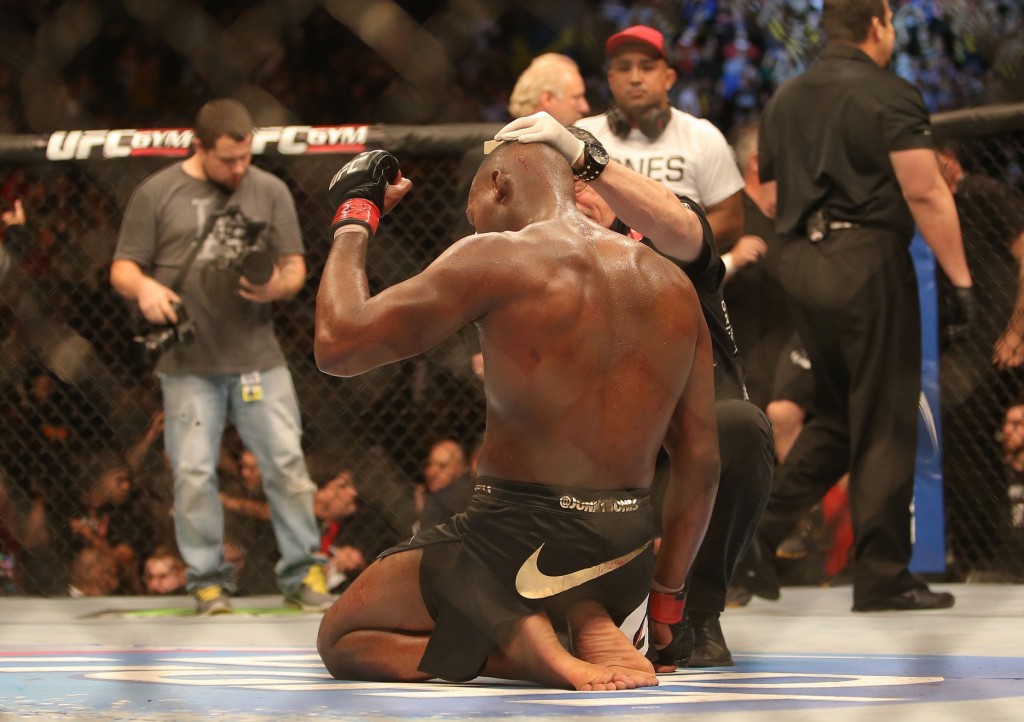 Back to Mr. Bones. Jon Jones signed an exclusive deal with Nike back in August of 2012. He joined the ranks of Michael Jordan, Lebron James, Tiger Woods, and so many other remarkable athletes. Jon Jones may not have been the first MMA athlete to sign with Nike, but he was the first athlete to sign a global endorsement deal that included his own shoe and line of clothing, titled “Bones Knows”. Jones has his own shoe, t-shirt and other apparel under the “Bones Knows” label. The combination of being ranked one of the top pound-for-pound fighters in the world and having the ability to fight live on FOX television surely helped persuade the Nike reps to leap into the MMA industry.

But Jon Jones isn’t the only UFC star to don the Nike swoosh inside the octagon. Before Jon Jones was seen with the famous Nike logo on his fight gear, long time champion Anderson Silva was seen wearing the Nike swoosh during his title defense against Yushin Okami at UFC 134. Similar to Jon Jones, Anderson Silva had Nike shirts donning the phrase “Silva Knows”. Anderson Silva who may perhaps be the greatest mixed martial artist of all time helped Nike executives see the value in working with MMA stars. Anderson Silva also has an exclusive endorsement agreement with Burger King which helps show the broad level of fortune 500 companies that are in the MMA industry.

Nike is not the only major player in the MMA market. In October of 2013 it was announced that UFC welterweight contender Johnny Hendricks had signed a multi-fight deal with Reebok. The world got to see him wear Reebok during his UFC 167 fight against champion Georges St-Pierre. While the controversy and results surrounding that fight could take up an entire separatearticle, the fact that Reebok was seen inside the UFC octagon in one of the biggest title fights of the year was a landmark moment for the sport. Reebok also has signed endorsement deals with World Series of Fighting champion Georgi Karakhanyan, and Bellator fighters Quinton Rampage Jackson and Muhammed Lawal.

The mega brands did not stop with Nike and Reebok. In 2013, we saw Adidas join competitors Nike and Reebok in the world of mixed martial arts. Adidas signed a multi-year deal with Resurrection Fighting Alliance in which fighters are seen wearing Adidas Mixed Martial Arts gloves.

Gatorade also got into the MMA frenzy when they teamed up with Jon Jones for his “fight of the year” bout against Alexander Gustafsson at UFC 165.

It is without question that MMA in general and more specifically the UFC have gotten mainstream acceptance which has resulted in mega brands entering the mixed martial arts world in an effort to capitalize on the rapid growth of the worlds fastest growing sport.