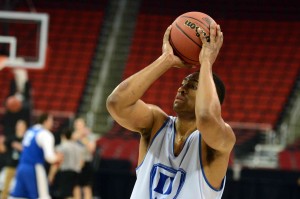 According to Fox Sports 1 and its NBA Insider, Bill Reiter, Duke’s Jabari Parker had signed with sports agent, Rich Paul.  Paul is the best friend and agent of Miami Heat star, LeBron James.

Paul also represents Tristan Thompson of the Cleveland Cavaliers and Eric Bledsoe of the Phoenix Suns, among others.

However, on May 8, ESPN Sports Business reporter Darren Rovell broke the news that Parker had actually not signed with Paul, and instead picked Wasserman Media Group.

In 2014, Parker was a Consensus First Team All-American along with the USBWA National Freshman of the Year.  He finished his freshman year averaging 19.1 PPG along with 8.7 RPG.

ESPN’s Chad Ford has Parker headed to the Philadelphia 76ers at No. 2 while DraftExpress.com has him slated to go to the Orlando Magic at No. 3.  Parker will be vying with Kansas’ Andrew Wiggins and Joe Embiid along with Kentucky’s Julius Randle for the No. 1 overall section in this summer’s NBA Draft.