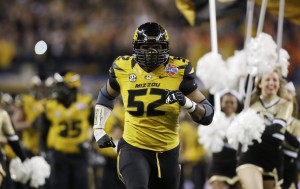 On his most recent podcast, ESPN’s Sports Business Reporter, Darren Rovell, chatted with one of Michael Sam’s agents, Cameron Weiss.  Weiss and his colleague at Empire Athletes, Joe Barkett, co-represent the 2013 SEC Co-Defensive Player of the Year.

Rovell and Weiss discussed Sam’s announcement that he is gay, his marketing and sponsorship potential, how the agency handles multiple interview requests for Sam, and much more.

The “SportsBiz” podcast with Rovell and Weiss begins at the 27:55 mark.  You can listen to it here.  Below are some high-level points from the conversation along with quotes from Weiss.

1)     Weiss said that his agency’s interactions with Sam started off with a simple email to Sam’s student account informing him of Empire Athletes, its services, and how the two parties could potentially work together.  Six weeks later, the agency received an email from Sam and as two parties have been working together ever since.  It should be noted that Empire Athletes isn’t the first agency to represent Sam.  His first agent was Jeff Sperbeck of The NOVO Agency.

2)     On the strategic announcement by Sam that he is gay and the collaboration with ESPN and the New York Times…“Michael was about to be outed, unfortunately.  We wanted to take no chances with that.  We wanted Mike to be able to tell his story his way, and we came to trusted partners, people we believe have been exemplary in delivering truth, unbiased, and have shown compassion towards the homosexual community.  We partnered with people we truly believed in.”  Weiss said that Empire Athletes worked closely with veteran publicist, Howard Bragman, to coordinate the announcement.

3)     On Sam dropping 70-90 spots on some mock drafts and draft boards following his announcement in February…“I looked at his track record, I looked at his performance over the past season, and I looked at the history of the SEC Defensive Player of the Year.  I struggled to find a reason why he was being downgraded so harshly.  Regardless of that, we believe in Mike as a football player.  It’s not about where you get drafted.  It’s about what you do, and we’re very confident Mike will have a long and successful career as an NFL football player.”

4)     On having shied away from off-the-field sponsorship and marketing opportunities so far…“I think that people look at what Michael did, I think they view it as exemplary.  They see courage, they see bravery, and it’s something that everyone can identify with.  We’ve been really selective with what we’ve done with Mike.  We don’t want to give off the impression that he’s “cashing in” on being gay.  We want him to be seen as a football player.  We want these ads to be focused on performance.  If you look at our strategies and what’s come out with Mike, you’ll see that it’s all very focused on that.”

5)     Sam has done one deal up to this point (Visa/digital only).  Weiss commented on that partnership, saying, “We have searched high and far for sponsors that we believed and represent the same things as us.  Visa is a world-class company, a high quality brand.  The message they wanted to convey with that commercial was something we have been stressing all along, which is judge Michael as a football player and judge Mike as a person.  Don’t judge him just because of his sexuality.”

6)     The importance of on-the-field success for Sam’s marketing…“It’s incredibly important.  If we can get here to the draft and Mike becomes the first player ever drafted who is gay.  He gets all of this notoriety and a warm reception.  If he doesn’t go out there and perform, it’s going to be short-lived.  Mike knows and we know that if he wants to have anything lasting — not even in terms of marketing even — in terms of his imprint on society, he needs to go out there and do his job.”

7)     Empire Athletes receives all types of interview requests for Sam — he’s granted a few but denied most.  Why?  Weiss said, “I think we’ve said all we need to say.  We get into these situations where people want to ask the same questions over and over again.  What good is that going to do anyone?…The three of us — Joe, Howard and myself — have really just tried to put the onus on ourselves and answer questions the best we can.  There’s 20 questions I’ll get asked different ways.  It’s not doing anyone any good really to just keep answering those the same way.”