On To The Next One: Oscar Taveras 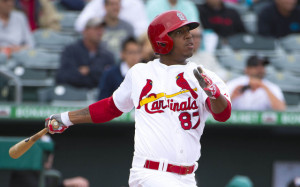 St. Louis Cardinals rookie outfielder Oscar Taveras has unfortunately been playing musical chairs with his agents as of late.

He has previously been represented by The Legacy Agency along with Rob Plummer & Associates.  He most recently left MDR Sports Management — which he has done multiple times before — for MVP Sports Group, which is owned by MLB sports agent Danny Lozano. While Taveras has settled on an agent for now, that could all change very quickly.

Last summer, Forbes.com ranked MVP Sports Group as the world’s No. 6 most valuable MLB agency.  At that time, the agency had $540-plus million worth of contracts under management.