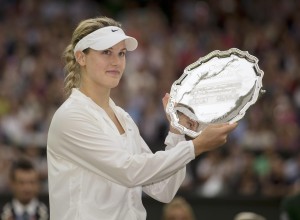 Eugenie Bouchard (CAN) holds up the runner-up trophy after her match against Petra Kvitova (CZE) on day 12 of the 2014 Wimbledon Championships. Photo Credit: Susan Mullane-USA TODAY Sports

Bloomberg has reported that sports management company IMG has approached tennis player Eugenie Bouchard about representing her. The 20 year-old Wimbledon finalist is currently contracted to Lagardere, but that agreement is due to end this year.

For those who have not heard of Bouchard, she is comparable to the No.1 NBA and NFL pick combined. Graced with a million dollar smile and a down-to-earth personality, Eugenie is a marketer’s dream. Her potential knows no bounds. She currently only has a handful of deals, including Nike, Babolat, and a recently signed Coke deal. Analysts estimate she is currently making $1-2 million in off-court income.

Based on the information above, it is no wonder why agencies are clamouring to secure her signature. Her talent was recognised at a young age, with Lagardere signing her up at the age of 13. This is not uncommon, as many agencies sign athletes as juniors in the hope they graduate to the respective tours.

The process of changing agents is not new, but this case in particular is different. With Eugenie only having a few deals, most still in their infancy, it leaves a large amount of commission to be made for the next phase of her career. As we all know, an athlete must pay the commission on deals signed with the agent, regardless if they have changed.

IMG will be pulling out all stops to try and add Bouchard to their roster. Their pitch may hinge around a player she has been compared with: Maria Sharapova. The Russian beauty currently makes over $20 million a year in endorsements, a feat not out of reach for Eugenie. IMG may layout a similar pathway to Sharapova, and show, under their management, how meticulously they have managed her. IMG can claim their vast network of divisions will be beneficial, which includes footholds in industries including models, fashion and entertainment.

Her current agency, Lagardere, are no slouch when it comes to representation. Their tennis division stocks a powerful roster including Victoria Azarenka and Caroline Wozniacki, who are in their own right pulling in over $9 million per annum off-court respectively. The company also manages the commercial rights of Andy Murray.

In February, I took a trip the US to peddle my wares (i.e. myself) and meet with as many agents as possible. I had the opportunity to meet with Lagardere Tennis, and was very impressed by their set up. I delivered a report on Bouchard, highlighting several opportunities. Despite reaching out to several agents at IMG Tennis, they declined my request for a meeting.

In my opinion Lagardere have managed her career to this point perfectly. There were several brands that reached out to her agents after her breakout performance at the Australian Open, but they knew not to sign the first deal that came along. They bypassed several short-term deals to focus on the big picture. In fact, Bouchard has only added local deals for Pinty’s, Usana and Coca-Cola this year. Her stock has risen considerably since January, further proving Lagardere made the right decision.

I can’t see Eugenie jumping ship to IMG. By all reports she has an excellent relationship with the company and I see this continuing. IMG will deliver their pitch, and Eugenie may well take the meeting, but I feel it will all be in vain.