For years, the representation of tennis players has been dominated by the big firms. IMG Tennis, with a list including Novak Djokovic and Maria Sharapova, represents over 140 tennis clients. French company Lagardere’s long list includes Caroline Wozniacki and John Isner, while Octagon represents Martina Hingis and Dominika Cibulkova. 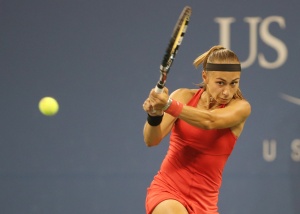 Founded in London by John Morris from nothing, GTC is developing a very talented roster of clients. The star of the pack is 19 year-old Nick Krygios. The Australian has had a breakout year, including defeating Rafael Nadal on his way to the quarter finals of Wimbledon. He currently sits at 51 in the ATP rankings, up from 183 at the start of the year. Krygios is one of the hottest properties in tennis, with sponsors clamouring to partner with him. He currently has deals with Nike, Yonex and Bonds, the latter who he signed with this year.

Another athlete making strides on GTC’s 14 client roster is Aleksandra Krunic. The 21 year-old shot to fame at the US Open, where she defeated three seeded players, including Wimbledon champion Petra Kvitova, on her way to the Round of 16. Krunic won over many new fans with her radiant personality.

With a reputation that is building by the day, the company has managed to sign established talent and coaches to their roster. This includes doubles specialist Cara Black and former top 15 player Jan-Michael Gambill. Realising the need for an academy to support their talent, GTC has partnered with academies both in the UK and Asia. IMG has a similar set-up, with their players utilizing their academy in Florida.

The team at GTC is relatively small compared to other tennis agencies. The core company staff comprises of the aforementioned John Morris, who serves as Director of Player Relations (which includes being primary agent), Clinton Coleman, who is Director of Player Advancement, and Ben Wilkins in the role of Sports Manager.

The company is very active on social media, with their Twitter and Facebook accounts providing regular updates on how their talent is performing. The players themselves are also across several channels, with Nick Krygios in particular being an avid tweeter.

While they still have a way to reach the heights of the larger companies, GTC is certainly headed in the right direction.