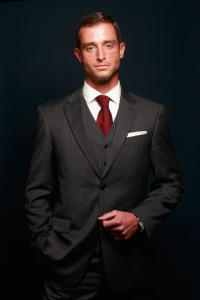 Doug Eldridge is the Managing Partner of Washington, D.C.-based DLE Agency, a full-service firm that specializes in brand management, public relations, contract negotiations, marketing/sponsorship and strategic communications.  A graduate of the George Mason University School of Law, Eldridge and his firm have worked with athletes across the NFL, NBA, MMA, golf and other sports along with on-air talent as well.  Follow him on Twitter here.

1) You graduated from law school in 2005 from George Mason, worked at the Department of Justice for a year and then started your own firm/agency.  Why the switch?  What motivated the career decision?

Having the opportunity to work at the Department of Justice was a tremendous honor at such a young point in my career.  I always knew, however, that I wanted to work with professional athletes, so it was simply a matter of taking the right path to get there.  I did an exhaustive amount of research and due diligence, prior to making the transition from government to sports and entertainment.  When the time was right, I eventually opened the DLE Sports Management Group. A few years later, it was renamed and re-branded as the DLE Agency.  I realize this process sounds a lot simpler, a lot cleaner and A LOT more glamorous than it really was, but seven years later, we continue to see aggressive growth and expansion.

2) Why did you originally attend law school in the early 2000’s?  How has that graduate degree helped you in your career?

Law school was really a map and compass for the professional journey that lay ahead.

Growing up, both of my parents had their masters degrees and always stressed the importance of education.  In high school, I played three sports and was a team captain as well as an All-American in track my senior year but I always knew that at any point, my Dad would pull me from the team if my GPA dipped below a 3.5.  They were trying to instill standards, from an early age, as they knew the impact and importance that my GPA and test scores would have down the road.

In college, I ran 400m hurdles but ultimately lost my love for the sport.  To be honest, I also realized I had no shot at the Sydney Olympics, and I was also under-performing academically. So, I hung up the spikes, hit the books, and graduated from James Madison University with a double-degree in International Business and Spanish.  At that point, I was accepted into George Mason University School of Law, which was the youngest law school in the Top Tier.

From elementary school onward, I was fortunate to have structure and support from my parents when it came to academics.  They provided both the carrot and the stick at various times, but always stressed that education would be the key that opened otherwise locked doors along my eventual career path.  They couldn’t have been more right.

My Dad died my first year of law school. My Mom was unwavering in her support and adamant in her insistence that I earn my juris doctor.  To her credit, I did well in law school, and was selected to the Moot Court Board and Honor Council.  I also participated in the Sports Law, and International Law Society, while doing two Ironman Triathlons in my second and third year at GMU Law.

Few people will tell you that law school was fun (Those who do, are likely now law professors themselves).  But despite the pain of the process, I can’t imagine doing my job today without that training and skill set.  Anything from contractual construction, to negotiations, to mediation, to even basic research and synthesis, law school is interwoven throughout my work each week, from Monday through Sunday.

3) How much of your agency consists of athlete representation versus consulting, PR and your other business offerings?

As an integrated agency, we provide a diverse array of services to our client base.  Seven years ago, we started out as a straight-forward athlete representation firm.  Over time, some of our players began to age out and retire but wanted to make the transition from the field to the booth.  As a result, I negotiated a couple media contracts and from there, one client became two, became three and so on.  Eventually, there was an organic outgrowth and we had a small, but free-standing Personalities Division.

At that point, the agency consisted of an Athletes Division and a Personalities Division.

Soon thereafter, I was approached by a regional business that was struggling with its brand identity.  They had seen some of the aggressive public relations work we had done with individual clients and asked me to scale our suite of services for their corporate construct.  A few days later, I brought them three core concepts for revitalizing their brand, along with a chronological implementation strategy.  Two days later, I signed them as a consulting client and over the last few years, we’ve added numerous clients to the consulting side of the firm.

Today, the DLE Agency consists of three internal divisions: an Athletes Division, a Personalities Division, and a Consulting Division.

Strategic public relations is, and always will be, the mortar that holds all of these bricks together.  We have built our foundation on effective strategies, techniques, and reputation-based relationships on the PR side, and it is something that still drives new client growth today.  Whether dealing with athletes, personalities, or brands, we have earned a strong reputation for strategic public relations, with tactical implementation and measurable ROI.

From an emerging corporate brand, to a stagnant established brand, to an individual personal brand, the qualitative difference maker is a cohesive public relations campaign.  We are very, VERY strong when it comes to integrated public relations work for our clients.

4) What does a typical work week look like for you?  What types of projects and tasks are you conducting?  How much travel does your business entail?

There are two points of commonality from day to day: 1) every day is long, and 2) no two days are identical.

I jokingly say that “I work in time zones.” My day starts each morning at 0400 EST, as it’s already 1000 in Western Europe. I begin returning calls and emails around 0430. Somewhere around 0600, I workout, and am usually showered, suited, and sitting at my desk by 0745.  At that point, I transition to the East Coast and work from Eastern to Central to Mountain to the Pacific time zone, as we get later in the day.  The scheduled calls usually end by 2100 EST, since that is 1800 PST and businesses on the west coast are starting to close up shop for the day. By now, it’s dark on Capitol Hill, at the DLE office, and I can do 60 to 90 minutes of clean up work before leaving the office by 2230 EST.  That’s the general structure of each day, but what happens within that structure differs from day to day.

Travel is a vitally important part of the job.  The frequency and intensity depends on the year as well as the particular season within that year. For example, in an Olympic year — which is every two years for us between the Summer and Winter Games — there is typically more travel.  A few years ago, I was gone 27 days in September.  Domestically, I probably travel to New York, Atlanta, Florida and California the most.  Internationally, I’ve really punched the passport, having closed deals and met with clients in Amsterdam, Abu Dhabi, Austria, Belgium, Canada, Cannes, Germany, London, Milan, Paris, Switzerland and Sochi, just to name a few.

In this business, you develop relationships on the road, you maintain them from the office.

5) Take us through your first negotiation session with a client/athlete – when did it happen, how did it turn out, what did you learn from it, how have you used those learnings throughout your career, etc.

My first negotiation was a UCI rider contract for my first client, an American pro cyclist who was slated to join the European peloton that season.  Looking back, that was my first lesson in real-world negotiation: don’t play the cards, play the man.

In any negotiation, you have to understand the terms and variables, as well as the best case, worst case, and most likely scenario moving forward.  As an agent, your obligation to the client is to plan (and negotiate) for the worst, while still hoping for the best.

Beyond that, it’s important to remember, and this is the part that’s not taught in law school or business school, that you’re not negotiating against the stats, the clauses, and the packages; you’re negotiating against an individual.  Knowing their personality type and their negotiation style is critical, as it will have a direct impact on the efficacy of the negotiation and the strength of the finished product for your client.

Looking back, that first UCI deal turned out well.  I delivered a strong contract and, in turn, the client had arguably the best season of his career.  I’m not saying the two are in any way connected, but when you’re focused on developing an integrated bonus structure based on performance incentives, it’s always nice when the client meets you half way.

Over the last seven years, I’ve done contracts across a variety of sports, languages and countries.  We’ve also executed television agreements, corporate sponsorships, and a litany of other deals within the three divisions of the DLE agency.  Whatever the topic, the same principle always applies: don’t play the cards, play the man.

6) What type of advice would you give aspiring sports business professionals who want to work in the agency business?

If you want to work in sports, here is the most honest (and least appealing) advise you’ll ever get:

1. Focus on academics (not on sports management) in the classroom.
Drill down a hard skill set like finance, marketing, law, accounting, communications, etc.  Something that gives you a demonstrable skill set that can be applied to the sports world, not a general working knowledge of the sports world.

2. Pound the pavement and perform as many internships as you can.
This is where you want to focus on sports.  Whether paid, unpaid, for credit, no credit…it doesn’t matter.  What you need (and what you lack) is experience and connections…internships provide both.  If you fight over pennies now, you do so at the expense of dollars down the road.
3. Always remember: Nobody ever fell to the top of the mountain.
Bury your ego, roll up your sleeves, prepare to work hard, and don’t expect to see a player contract or deal directly with the star client.  That’s not just realistic.  By definition, any entry level position, means you’ve literally just walked in the front door; you haven’t even made it to stairs yet to begin the climb.  Know your place and know your role.  Be humble, be hungry, and be willing to work harder than your colleagues and competitors.  What you want and what you’ve earned are not the same thing…but you can work until they are.
Share