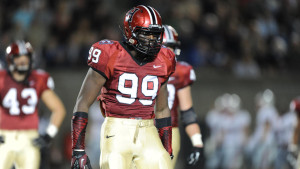 Harvard’s Zach Hodges has hired Drew Rosenhaus to represent him, according to Yahoo’s Rand Getlin. Hodges is a projected 3rd round pick on NFLDraftScout.com’s prospect rankings.

Drew Rosenhaus is one of the most well known agents in football and his agency, Rosenhaus Sports, represents many prominent players in the NFL. Forbes named Rosenhaus the 7th most powerful agent in sports with clients like Antonio Brown, Charles Johnson, and Rob Gronkowski.

Hodges, who has been invited to the East-West Shrine Game and Senior Bowl, was named the Ivy League Co-Defensive Player of the Year. He is Harvard’s career sack leader with 27 sacks. He is 9th best available OLB and 94th overall prospect on NFLDraftScout.com.