UCLA QB Brett Hundley has decided to pass on his final year of eligibility as the redshirt junior has declared for the 2015 NFL Draft. He has signed with Priority Sports agent Kenny Zuckerman for his representation, according to a tweet by Sports Business Journal’s Liz Mullen. 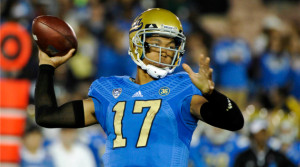 Hundley, 6’3″ and 226 lbs, was a 3-year starter at UCLA and had a record-setting career. Entering his 2014 campaign, he had thrown or run for a touchdown in each of his 27 career games. This season, he threw for 3,155 yards and 22 TDs and rushed for  644 yards and 10 TDs. Considered among the most talented quarterback prospects in this class, he is ranked as the 3rd best quarterback according to DraftTek.com and is a projected 1-2 round pick.

Priority Sports has been named one of the top football agencies by ESPN in each of their last five rankings, and has represented more than 30 first round draft picks. Having negotiated over a billion dollars in contracts in the last 3 years alone, the agency has one of the highest client retention rates in the business. Kenny Zuckerman is a veteran agent who has been in the business for 25 years and handles all football related issues pertaining to his clients at Priority Sports.