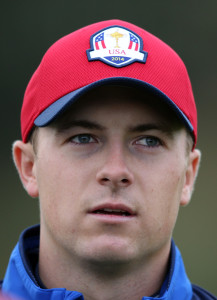 Jordan Spieth, one of the hottest properties in golf, has signed a 10 year extension deal with Under Armour. The company signed him in January 2013, shortly after he turned pro. That contract was for 4 years, but it is understood the new 10 year will take effect now, negating the final 2 years of the previous contract. Financial terms were not disclosed.

Coming out of the University of Texas, Spieth was highly touted to be the next star of the PGA Tour. Under Armour pushed hard to sign him, offering Jordan money that was rarely seen by a rookie. This has paid dividends, with the 21 year old notching up wins in the John Deere Classic in 2013 and the Hero World Challenge late last year. He also won the Australian Open in Sydney.

Under Armour’s deal encompasses head-to-toe, meaning he cannot wear any other logos while he is out on the course. Often golfers will have a separate shoe and hat deal to their clothing, but Under Armour is taking the position of competitor Nike in capturing the player’s entire outfit.