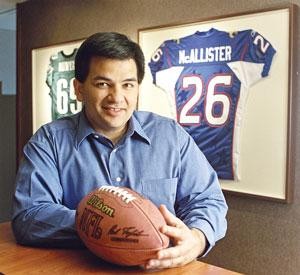 According to Sports Business Daily, NFL agent Ben Dogra will now be working at Relativity Sports as Co-CEO of their football division. Dogra will be working alongside Eugene Parker who previously ran the division by himself. Relativity Sports has positioned itself to be the most powerful football player representation practice in the country with the addition of Dogra. The hiring creates a practice of more than 100 clients.

Before joining Relativity Sports, Dogra worked for CAA Sports before being fired on November 13, 2014. Relativity CEO Happy Walters said the following about hiring Ben Dogra “There’s no doubt it’s a game changer. Ben is probably one of the best agents — across any sport — worldwide. That’s unequivocal.” Dogra will continue to work out of St. Louis, where he lives.

Josh Swartz, Relativity Sports President said “Ben will contribute not only to the continued growth of our football division, but will lend his considerable expertise to help build our entire sports and entertainment platform.” Dogra and Parker will report to Swartz.

Due to pending litigation with CAA Sports, Dogra’s attorney Rusty Hardin has been commenting on Dogra’s behalf. Hardin said he did not know how many of Dogra’s clients had left him to stay with CAA Sports, but that the majority chose to stay with Dogra. Under NFLPA rules, players sign with individual agents, not agencies.

Walters is not concerned about the pending litigation between Dogra and CAA Sports. He said “Whatever issues he has with CAA will work themselves out in arbitration. That is between Ben and CAA.”