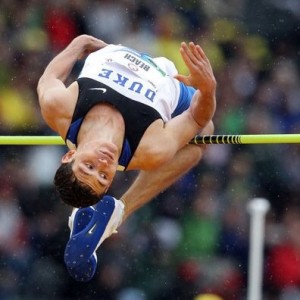 This morning, 2x NCAA Champion and 5x NCAA All-American track star, Curtis Beach announced his plans to partner with Nike as he embarks on his professional athletic career.  Beach, a 2014 Duke University graduate and decathlete, began training with the World Athletics Center in Phoenix, AZ last September. Prior to attending Duke, Beach won the USATF National Jr. Decathlon Championship and earned 17 individual titles in the New Mexico State Championships. Additionally, Curtis was awarded the International Fair Play Award in 2012 and was the USTFCCCA National Field Athlete of the Year in 2012 and 2014.

Curtis has found a partner with Nike that can help him realize his Olympic dreams by providing the products and resources he needs in competition and training. “Being part of the Nike family is huge,” said Beach.  “With Nike’s reach, experience and expertise in track, I believe the company can help me accomplish some great things, and in doing so, I hope I can help Nike achieve its goals as well.”

“Nike is excited to welcome Curtis to the Nike Track & Field team,” said Nike Director of Global Athletics John Capriotti.  “He was a star at Duke, and we believe that he will be a star in professional track.”

Additionally, Beach has decided to sign with Flynn Sports Management and C1 Marketing Group for his representational needs. While the terms of the Nike agreement remain confidential, Beach’s agents have confirmed they are on par with other championship level track athletes.

Beach is currently training with World Athletics Center in order to prepare himself for the 2015 IAAF World Championships in Beijing, China and 2016 Summer Olympics in Rio de Janeiro, Brazil. Beach’s professional debut will take place at the 45th Annual Mt. Sac California Invitational on April 15-16th at Azusa Pacific University. He plans to compete in the Decathlon events.