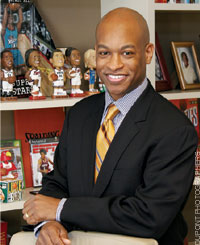 Jim Tanner of Tandem Sports & Entertainment has had an impressive career as a NBA agent. He has represented the likes of NBA Champions Tim Duncan, Ray Allen, and Shane Battier. Tanner is the President of Tandem Sports & Entertainment and  has practiced sports and entertainment law, representing professional athletes in a range of legal and business matters—from player contract negotiations to advertising and marketing contracts. He is certified as an agent by both the National Basketball Players Association and the Women’s National Basketball Players Association. In addition to professional athletes, Jim also represents a number of broadcasters and professional and college coaches in employment contract negotiations.

Cook is coming off of a Championship season with the Blue Devils, he averaged 15.33 points, 3.36 rebounds, and 2.64 assists per game during his senior season. Dawson during his senior campaign averaged 11.86 points, 1.66 blocks, and 9.11 rebounds. Polee is entering the draft as a 5th year senior after transferring from St. John’s to San Diego State after his freshman year and averaged 7.75 points, and 2.60 rebounds this past season. Saunders put up big numbers during his senior year with Harvard averaging 16.63 points, 6.07 rebounds, and 4.27 assists.

From Tandem’s website: “Tandem is a full-service sports and entertainment agency with expertise in athlete management, talent representation, marketing, communications and publicity services. Collectively, our employees have over 100 years of experience in the sports and entertainment industry and we represent some of the biggest stars in professional sports and broadcasting, including elite NBA and WNBA athletes, broadcasters, coaches, industry executives and sports organizations.”