The following is a guest contribution by Jack Trachtenberg and Jason Feingertz. Jack Trachtenberg is counsel and Jason Feingertz is an associate at Reed Smith LLP. They both advise clients on all aspects of state and local tax and have experience with residency planning and audit defense. Feingertz has a unique perspective on the sports industry having represented both sports franchises and players, including experience interning for the Brooklyn Nets and Dynasty Athlete Representation. Previously, Trachtenberg served as the first deputy commissioner and taxpayer rights advocate at the New York State Department of Taxation and Finance. 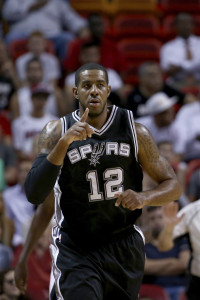 With the 2015-16 NBA season starting this week; it’s a good time to look back at some of the decisions made this past offseason with a focus on their tax implications. While some question whether state taxes really affect decision-making by athletes, the following examples should show how important it is for an athlete to have a tax advisor guiding them through all contract decisions!

While there are many other factors at play, state taxes should have an impact on any financial decision a modern athlete makes. Here’s an answer provided by Phil Jackson, President of the New York Knicks, when asked what issues he faces recruiting players to NY: “One problem is the state and the city tax here. There are places like Texas and Florida that have none of these taxes.”

LaMarcus Aldridge – Aldridge was the top NBA free agent available this summer and teams were lining up to sign him to a maximum contract at 4 years and $84 million. Aldridge’s decision came down to a choice between the Los Angeles Lakers and the San Antonio Spurs.  This choice could have resulted in significant state tax consequences whether he made the move to the California or Texas.

California has a top personal income tax rate of 13% while Texas does not impose a personal income tax. Ultimately, Aldridge chose the Spurs and the opportunity to establish residency in a no-tax state. Those guys named Duncan, Parker, Ginobli, Kawhi and Popovich may have had something to do with it too!

If Aldridge establishes residency in Texas, he should not be subject to state taxation on his endorsement income and any salary he earns while playing in Texas. Additionally, because Florida and Tennessee do not impose a nonresident tax on professional athletes, he would not be subject to tax on those games too.  While earning $84 million over the next 4 years, plus endorsement income, Aldridge could see a significant financial benefit from establishing residency in Texas.

Deron Williams – Deron Williams had the opportunity to take advantage of a tax planning opportunity while planning his escape from the Brooklyn Nets this summer. When a player receives a contract buy-out, this income should only be taxable to his residency state, and should not be subject to apportionment under any “Jock Tax”. If the athlete can establish residency in a state without a personal income tax prior to the contract buy-out, that income may not be subject to state taxation at all, even if the player signs a new contract to continue playing professionally.

Deron agreed to a buyout with the Nets for $28 million of the $42 million left on his contract. Deron made up for part of this difference by simultaneously signing with the Dallas Mavericks for $10 million over 2 years. Shortly thereafter, Deron sold his home in New York City and expressed his excitement about moving back home to Dallas, which was where he grew up.

While on the surface it looks like Deron gave up significant money through this buy-out, if he established residency in Texas before the buy-out, this may not be the case. During the past few years, Deron presumably filed as a New York City resident, as he owned a home in Manhattan and spent the past 5 seasons playing for the Nets. The timing of his residency move will be important in determining the state to which the buy-out income should be allocated. If he waited until after the buy-out to move to Texas, that income could be allocated to New York State and City as income earned while he was still a resident. This shows the importance of an athlete thinking proactively about state tax considerations prior to signing any contract or buy-out agreement. With proper planning, an athlete like Deron Williams could structure their buy-out so that it is not subject to taxation in New York State or City.

Milwaukee Bucks – This summer, the Milwaukee Bucks worked closely with the local Wisconsin government to develop plans to build a brand-new state-of-the-art facility for the team to play in. When faced with a budget shortfall and with the public having a small appetite for providing taxpayer assistance for building a new arena, Wisconsin legislators focused on the tax generated from the Wisconsin Jock Tax on Nonresident Professional Athletes to fund the arena.

It is well known that an individual is subject to income taxation in their state of residence. States also typically tax income earned by nonresidents from sources in the state.  For example, Wisconsin imposes a nonresident income tax on visiting professional athletes who have earned income within the state.  Wisconsin taxes visiting players’ salaries, which is apportioned among the states based upon the percentage of total “duty days” an athlete spends within Wisconsin. Wisconsin collected $6.52 million in income tax from NBA players in 2014 and expects this amount to increase to $13.55 million by 2024. Legislators noted that the state would lose this income, which currently flows into Wisconsin’s general fund, if the team were to relocate out of the state. Ultimately, the new arena was approved and the Milwaukee Bucks will continue to play in Wisconsin for many years to come.