On To The Next One: Randal Grichuk

Per MLB Trade Rumors, St. Louis Cardinals outfielder Randal Grichuk has joined Excel Sports Management, where he will be represented by Casey Close. He was previously represented by Priority Sports. 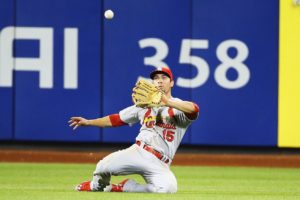 The 24-year-old Grichuk is in his second full MLB season after being drafted by the Angels 24th overall in the 2009 draft. Superstar Angels outfielder Mike Trout was taken with the next pick. He was acquired by the Cardinals with Peter Bourjos in a 2013 trade with the Angels in exchange for David Freese and Fernando Salas. In his rookie year in 2015, he slashed .276/.329/.548 while hitting 17 home runs in 350 plate appearances.

The Cardinals control his contract through the 2020 season due to his MLB service time (1 year and 61 days). He will not be arbitration eligible until the end of the 2017 season. His agency change comes at an interesting time, but Excel has negotiated long term deals with Alex Gordon, Freddie Freeman, Chris Johnson and Brandon Belt.

Grichuk joins a roster of clients that also include Zack Greinke, Jason Heyward, Dexter Fowler, and Masahiro Tanaka among others.