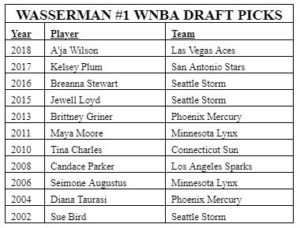 11 of the past 17 first overall picks have been represented by Wasserman.

Not only does Wasserman represent two of the top four picks in the draft, but it marks the fourth straight year where the agency represents the 1st overall pick.

Being the first overall pick AND getting a message from her favorite player @blakegriffin23.

Williams had a highly successful career herself as a member of the storied UConn Huskies women’s basketball program. A two-time national champion (2015, 16), she won the Cheryl Miller Award as the nation’s best small forward in 2018. She was also an All-America Second Team member, All-AAC First Team and a semifinalist for both the Wooden and Naismith awards.

“I am happy to welcome A’ja and Gabby into the Wasserman family and can’t wait to help them begin what I expect to be long and successful careers,” said Colas. “Like all our athletes, these women are not only incredible basketball talents, but are also committed to having a positive impact away from the court and use their platform to advocate for the values and beliefs they champion.”

Not wasting any time, Wilson launched a campaign to benefit programs and services at the Palmetto Health Children’s Hospital Center for Cancer and Blood Disorders in her hometown of Columbia, SC.