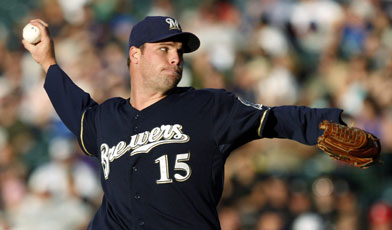 Sports agent Casey Close of Creative Artists Agency (CAA) had to love the small window between when Ben Sheets first hit the mound for a throwing session last week and when the CAA client signed with the Oakland A’s this past Tuesday. Not only was it a quick turnaround, but Close had Sheets sign a contract that many are saying is more than favorable for Sheets, and the deal is with a team that is notorious for not making these types of moves.

$10 million is quite a lot to pay any player over the span of a year, but is especially a large gamble when it is based on one throwing session on a guy who was sidelined for an entire year after going through elbow surgery and a rehabilitation process. With 1,428, will Sheets’ arm be able to handle the starting pitcher load for the entire season? A’s fan’s will demand it, considering that Sheets is now the second highest player on Oakland’s squad (behind Eric Chavez).

Not only was Sheets not fit to play last year, but in his past, he has suffered from right rotator cuff tendinitis which may require might require shoulder rotator cuff surgery, later had right rotator cuff inflammation, a back injury that has sidelined him four different times in his career, a bad shoulder injury, and a rough right finger injury. I’m probably missing something. You have to give props to a player who can keep coming back from injury and perform very well at the highest level of his profession; however, you also have to ask how long that will last. When I think of durable, I think of the late Steve McNair…but how many McNairs exist?

Billy Beane knows that he has taken a risk. Was it a calculated risk? Whether Sheets performs well on the field or not, he knows that his client will be getting paid handsomely. And if Sheets does perform the way that the A’s hope, he can earn another $2 million in bonuses before all is said and done ($500,000 more for reaching each 165, 175, 185, 195 IP).

One reply on “Warm With Money Between The Sheets”

I think this deal is seen more as a “flip” than a deal to help the A’s rotation. Just as they did with Matt Holliday, I think the A’s are planning on showcasing Sheets for the first few months of the season, and then promptly dealing him for some much lower priced young talent.

Lets check back on this theory around the trade-deadline.