Ovechkin vs. Crosby: A Hot Rivalry 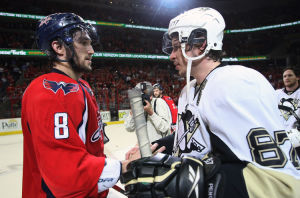 In the 1980s, it was Wayne Gretzky and Mike Bossy.  In the 1990s, it was Scott Stevens and Eric Lindros.  In the 2000s, the most heated rivalry easily belongs to Alexander Ovechkin and Sidney Crosby.  Their battle is possibly the most competitive one in the history of the NHL because they are so close in age and talent.

Since coming into the league together in 2005, Crosby and Ovechkin have played each other 17 times in the regular season.  Crosby’s Pittsburgh Penguins have won 11 of those games.  In those 17 match-ups, Crosby has 29 points (11 goals, 18 assists) and Ovechkin has 25 points (13 goals, 12 assists).

By the time both were 16 years-old, Crosby and Ovechkin were being compared to hockey legends Mario Lemieux and Wayne Gretzky.  Both were drafted with the #1 overall pick in the NHL Draft, Ovechkin in 2004 and Crosby in 2005.  At 24 years-old, Ovechkin is already in his 5th season in the NHL (he lost a year with the 2004-2005 NHL lockout), while Crosby, who is 22 years-old, is also in his 5th season.  Both players are also two of the youngest captains in the history of their teams, Crosby of the Pittsburgh Penguins and Ovechkin of the Washington Capitals.

While each player has won his share of individual trophies, there is at least one thing that Crosby has won that Ovechkin has not: the Stanley Cup.

In last year’s playoffs, Crosby and Ovechkin played each other in the Eastern Conference Semifinals.  Both finished the seven game series separated by only one point, Ovechkin had 8 goals, 6 assists, Crosby had 8 goals, 5 assists.  However, Crosby and the Penguins got the last laugh by winning not only that series, but also the Stanley Cup against the Detroit Red Wings.

Ovechkin’s Capitals enter this year’s playoffs as the top team in the NHL, more than 10 points ahead of Crosby’s Penguins.  For Crosby to repeat, he will almost certainly have to play Ovechkin at some point in the playoffs.  Despite the better record, with Crosby and the Penguins having won the Cup last year, it is likely that this experience will help them prevail over Ovechkin and the Capitals again this year.  Ovechkin will win his own Stanley Cup soon, just not this year.

For now, it seems that Sidney Crosby has the upper hand in his battle with Alexander Ovechkin.  Which one do you think is best and will lead his team to the Stanley Cup this year?