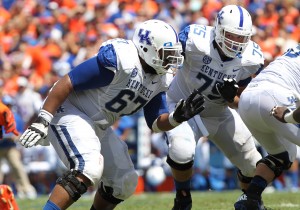 University of Kentucky offensive guard Larry Warford has officially determined that he wishes to be represented by football agency Schwartz & Feinsod leading up to the NFL Draft.

Warford was a Second Team All-Southeastern Conference selection by the media and coaches in 2012.  He is the first Kentucky offensive lineman to receive All-SEC honors from the coaches three times in his collegiate career.  Most impressively, Warford was not once responsible for his quarterback being sacked in the 2012 season.

NFLDraftScout.com currently ranks Warford as the 4th best offensive guard available in the 2013 NFL Draft and the 61st best player available overall.  The site projects him to be a second round pick.