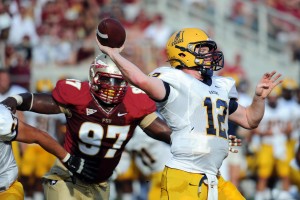 Casey Brockman and Roddy Tomlin have both been invited to play in All Star Games. Casey will be playing in the Raycom College Football All-Star Classic and Roddy will play in the Casino Del Sol College All-Star Game.

Earls had the pleasure of meeting Casey and Roddy on a trip a few weeks back and was extremely impressed with their skill set, coaching, and professionalism.  The agent who loves answering questions from his followers on a Formspring webpage told Sports Agent Blog, “It is an extreme honor to represent 2 highly motivated, skilled, and professional NFL Draft prospects from the same university.”