Mike Tannenbaum Remains An Agent Even With New Consulting Role 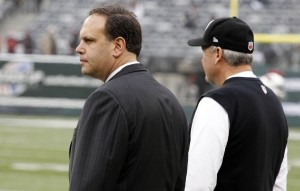 As of last Friday, Tannenbaum will now try to balance two competing responsibilities, with some arguing that there may be conflict of interest between a position on the agency side and now, on the team side.

Tannenbaum will serve as a consultant with the Miami Dolphins, according to NBC’s ProFootballTalk.  He’ll concentrate his efforts around innovation, analytics and sports science.

“As an organization, we are committed to innovation and technology and we feel the creation of our analytics department and the development of our sports sciences program will help our personnel, coaching staff and players reach their full potential,” said Dennis Hickey, current Dolphins General Manager.