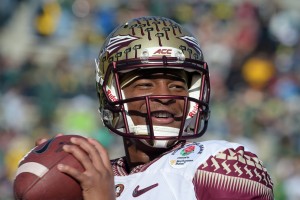 On the same day Jameis Winston announced he would be entering the 2015 NFL Draft to go pro, he announced another big decision. Winston has chosen The Legacy Agency to represent him leading up to the draft. Winston is regarded as a potential #1 pick.

Jameis Winston is one of the best players in the history of Florida State University. As a redshirt freshman in 2013, Jameis threw for 4,057 yards with 40 TD’s and 10 interceptions. He won the Heisman trophy and led FSU to an undefeated National Championship season. This season, Winston’s numbers were not as impressive as he had 25 TD’s and 18 interceptions to go along with 3,097 yards. NFLDraftScout.com lists Winston as the #3 best available prospect behind Oregon’s Marcus Mariota and USC’s Leonard Williams.

Winston’s choice of The Legacy Agency is an interesting one. Winston will be the first football player they represent on the team contract side. Neil Stratton of Inside The League, reported rumors that Winston would go to TLA back in November. The Legacy Agency is more well known for the baseball players they represent such as, Billy Butler, Melky Cabrera, and Johan Santana. Jameis selecting baseball agents is very similar to the decision made by Russell Wilson. Since baseball players can go pro straight out of high school, baseball agents can connect with these athletes sooner than most football agents. With most of Jameis’ issues coming off the field, his agents could have a major impact on him getting selected with the 1st overall pick.