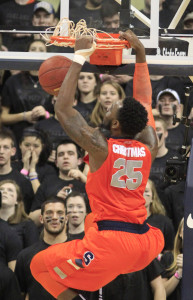 Rakeem Christmas is a 6’9” forward/center who spent the last four seasons playing for Jim Boeheim at Syracuse University. Christmas saw an increase in playing time and touches leading to his best season with the Orange. Christmas averaged 17.5 points per game and 9.1 rebounds per game on his way to many ACC awards. The forward was the ACC’s Most Improved Player and was named to the All-ACC first team and ACC All-Defense team. Christmas is projected as a late second round pick in the NBA Draft and currently ranks as Chad Ford’s 55th best available prospect.

Stephen Pina is a certified NBPA agent that has been with ASM Sports since 2010. According to DraftExpress.com, Pina also represents former Kansas guard Elijah Johnson and former Temple guard Khalif Wyatt.