There are very few books written by sports agents and even fewer that devote a substantial amount of pages to discussing the profession of representing athletes. NBPA agent, Keith Glass, takes a shot at covering that topic and other NBA related material in his book, Taking Shots. It is not surprising to hear someone critical of the state of the sports agent industry; however, usually the criticism does not come from within the ranks. Keith happily introduces readers into his life as an agent, discussing many problems that he and his colleagues have created in addition to tackling a plethora NBA troubles that exist without the help of agents being involved.

Both Keith and I would agree that the NBA and basketball, in general, are great. Even though Keith is a fan of the game, he discusses how he cannot stand the $100+ tickets to see two teams play backups and the way that the NBA has prioritized marketing its product above everything else. His style of writing is witty and sarcastic, making Taking Shots a pleasure to read. The rich content helps, too. Topics include: Negotiating Scott Skiles’ contract with the Orlando Magic on paper napkins at a spring training baseball game, the disgusting looking 2004 Olympic Basketball Team, Keith’s natural ability to represent players above 7 feet tall, Mahmoud Abdul-Rauf (the only guy who wouldn’t stand for the national anthem), Keith’s man-crush on Larry Brown, and a bunch about why agents are necessary for basketball players. While Keith believes that agents are necessary, he feels that they should go back to being solely advocates and representatives for their clients and quit creating new roles for themselves. 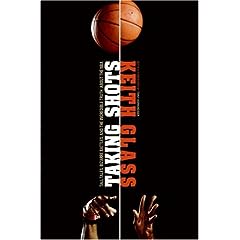 Keith sets the stage strong with his Forward. When you kick off your book with a short piece by Tony Kornheiser, you instantly get my approval. He follows up Tony on the first page by telling you exactly what he will go on a tirade about throughout Taking Shots:

The NBA is too powerful. Players make too much money. Teams charge too much money. The league sells too many products. Many coaches and administrators seem to have all the answers, and yet the game itself has become a selfish, tedious, and colossal bore.

You may be thinking to yourself, Is this guy trying to commit professional suicide? The first time I read that excerpt, I could not believe that it came from the pen of an agent. Keith does not beat around the bush in Taking Shots; he gives you his dry opinions on the state of basketball and the NBA and does not hold back sharing his feelings on any issue.

I believe that right now is a particularly good time to pick up Taking Shots. We are less than three weeks away from the 2008 NBA Draft and right in the middle of the 2008 NBA Finals. You could say that it is NBA Season. Keith gives some insightful information regarding this “season”. He opines that a player who is projected to be a top 20 pick should not play in an NBA pre-draft camp and that by September or October, most of your clients should be signed either in the NBA or overseas. Also, remember the recent discussion about the NBPA claiming it would take a stronger stance on enforcing its rule against an agent representing players and coaches? Keith’s father is a rare example of an agent who was suspended prior to the recent edict.

If you are a loyal reader of this blog, I give you my personal guarantee that you will enjoy this read. I leave you with a final excerpt from Taking Shots that put a smile on my face:

I actually believe that one hundred years from now when they study our culture, future generations will have two basic questions: The first will be what did men do to the women back then that prompted the courts to force them to pay sums of money to get away from them, and second, what was up with the salary cap?

[…] agent along the way is Keith Glass, whose book Taking Shots was reviewed on this site not long ago. Paul still plays professionally, and regularly writes a column on […]