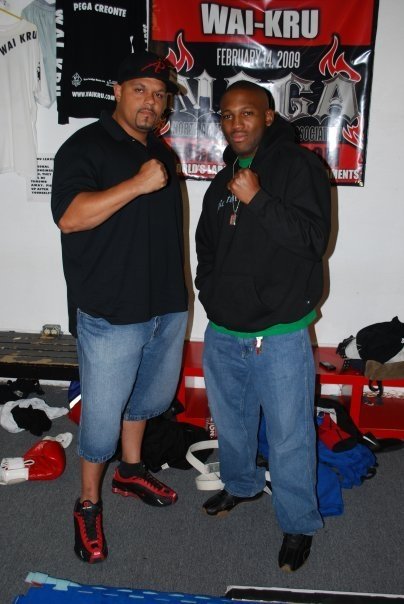 For the past 48 hours, I have been debating whether or not I should actually make this post.  Then, after talking to a few people, they woke me up and made me realize that I actually had absolutely no choice.  If I did not write this post, I would be going against what this site is all about: openness.  I cover agents’ unethical actions when I am not involved, so when I am actually involved, I cannot keep the story out of sight.  Here we go…

Over the past week, I have received many calls and messages from friends, colleagues, family, and clients, asking me who Jay Hairston (on the left, wearing the cap) is and why he was sending them “friend requests” on Facebook.  Originally, I thought it was just a coincidence that I was the only “mutual friend” on these peoples friend lists.  After the fifth call/message, I started to get curious.

On Monday evening, I decided to finally do something about it.  I did a search for “Jay Hairston” on Facebook and was greeted with a profile picture displaying Athletes Premier International‘s logo.  I also noticed that we had over 150 friends in common, yet Jay never friended me on Facebook.  Did we just know a lot of the same people and had never met?  Again, his friends included former roommates, fraternity brothers, and family of mine (who have less than 50 friends total on Facebook).  Most concerning was that this guy I had never met nor heard of was sending friend requests to all of my clients.

Since I was not friends with Jay Hairston, I could not read his profile.  I went to API’s website, and found that his name was completely omitted.  This is where I started to get really concerned.  I sent a few tweets to API’s twitter account, asking for an explanation.  The only response I received was Jay Hairston changing his Facebook privacy settings to restrict me from finding him in a Facebook search results page.

I had one of my friends who had accepted Jay’s friendship request pull up his profile, and that friend let me know that Jay lists himself as the Vice President of Player Relations and Recruiting.  At this point, I knew something very shady was going on.  What business does a rival agency have in reaching out to my entire network?  There is nothing illegal about making friend requests to people you have never met, but it sure does make you and your company look very shady.

This is an interesting and silly tactic for a brand new agency.  Athletes Premier International has one baseball client, and it is a big one: Aroldis Chapman.  First of all, I have given the agency no reason to solicit my friends, family, or clients.  Second of all, the company has received good press thus far in its shopping of Chapman to various MLB teams, does it need to now resort to dirty tactics to grow further?  Third, why is Jay Hairston not listed on the company’s website?  And of all employees, I have most concern about a VP of Player Relations and Recruiting contacting my clients.

I reached out to Jay and he was nice enough to respond in a timely manner.  Additionally, he was pleasant in his responses, but I think I was more upset that he was lying to my face than anything else.  I would have been happier if he was blatantly honest and told me to go screw myself.  Here is what he said to me in our conversation thread.  Let me know if you think he is being genuine.

Mr Heitner.  By no means am I attempting to do anything shady as you put it.  I am simply networking!  I do appologize if I offended you in anyway.  This was not my intentions.

You are telling me the truth that you friended former roommates and fraternity brothers of mine in an effort to network?  What value do they bring to the table?

What networking did you hope to do by friending my clients that I have listed on my agency’s website?

I am not out to hurt your company or anyone elses company.  I am more than happy with representing the clients I currently have and using those gentlemen to provide solid referrals.  I truly hope that you have no cruel intentions.  I believe that most men are honest, and I will take you at your word, even though your actions (including preventing me from pulling your name up on a search) should lead me to believe otherwise.

I accept your apology and hope that we can put this entire matter behind us.

His last response was very nice, but I believe that it was entirely mocking the situation at hand.

Mr Heitner, as for friending former roommates and fraternity brothers of yours, yes it is random!  I am NOT in the practice of stealing or attempting to steal anyones clients!  Its not who I am as a person or who API is as a company.  I am simply trying to get our name out there!  That is all!  In my expierience the more people that know who you are and what it is you do. The better off a business will be.  As you know, people do talk.  So whether that’s the gas attendant at your local gas station or an athlete at a university.  You never know who will be the link to that next big client!  Once again I do appologize for the simple misunderstanding!

You are simply trying to get your company’s name out to my friends, family, and clients?  Create a blog, send out tweets, contact athletes that are not already represented, but solicit my friends list on Facebook?  I doubt my step-father is going to be the link to your next big client.  There is no misunderstanding about what transpired.

And as for Jay Hairston’s Facebook status as of yesterday, it read: “we must be doing something right…”  I agree, if that something is “getting your name out there” in an unethical manner. 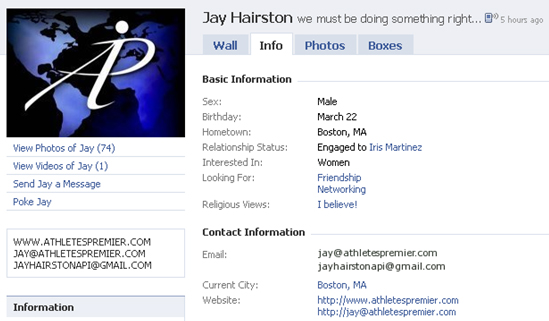