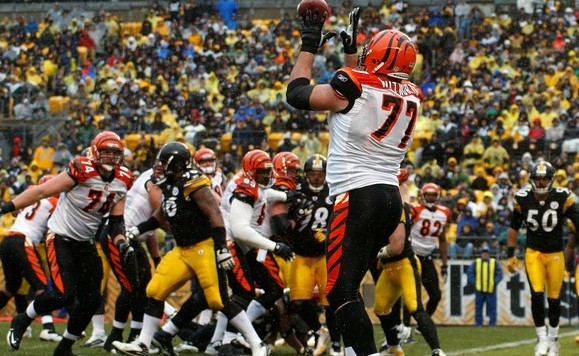 The name of that firm is SportsTrust Advisors, which was created by the merger of Sexton’s Athletic Resource Management and Dye’s ProFiles Sports.  In addition to gaining Cincinnati Bengals left tackle Whitworth, SportsTrust also recently added defensive end Stephen Bowen of the Dallas Cowboys to its client roster.  Just prior to adding Bowen, SportsTrust lost a big client in Peyton Hillis to Kelli Masters of KM Sports.

My notes indicate that Andrew Whitworth was represented by Stephen Colson, who was with Prestige Sports Management when Whitworth was drafted #55 overall in the 2006 NFL Draft.  Colson later became a part of Guardian Sports Agency.  As far as I understand, Whitworth remained with Colson until he recently left to sign with Pat Dye of SportsTrust Advisors.

2 replies on “On To The Next One: Andrew Whitworth”

Good move of Whitworth, we all hope that through this sign up, he can uplift or improve his career. More power to him in his coming years. We’ll look forward for more updates from him..

Good move of Whitworth, we all hope that through this sign up, he can uplift or improve his career. More power to him in his coming years. We’ll look forward for more updates from him..