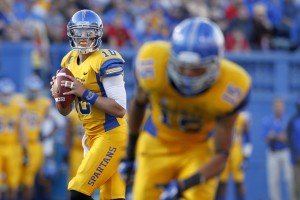 SportsAgentBlog.com lists Swanson as the No. 1 rated center in the upcoming Draft.  NFLDraftScout.com also ranks Swanson as the top center; he is projected to be a first or second round selection next May.

The Kingwood, Texas native started 50 career games at Arkansas and was Team Captain for the 2012 and 2013 seasons.  Swanson has recently accepted an invitation to play in January’s Senior Bowl in Mobile, Ala.

San Jose State’s David Fales — a two-year starter — finished the 2013 campaign with 33 touchdowns and threw for 4,000-plus yards.  At the team’s awards banquet, Fales was named Most Valuable Player.  Like Swanson, Fales will also play in the Senior Bowl, the first Spartan quarterback to ever participate in the top college All-Star game.