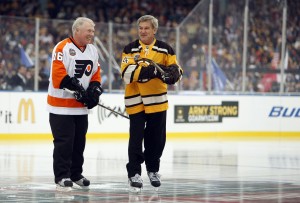 1. When did you first realize you wanted to become a sports agent?  As a follow up, how did you obtain your first client?

Ironically, it was Bobby Orr who provided me with my first glimpse into the business of hockey.  I started as a Jr. Counselor at the Orr Walton Sports Camp when it opened its doors back in 1969.  The people I met and the opportunities I was provided became the foundation of my career in professional hockey.  More specifically, I had the good fortune to be mentored by Bill Watters who himself went from the camp’s Director to become an industry leader.  As his protégé, my aspirations paralleled his as I followed him through every phase of his successful career.  Working as his assistant I was initially responsible for pre-scouting and recruiting our new clients.  As he guided me through the process of contract negotiations he encouraged me to become less dependent and to develop my own approach of conducting business; more suited to my personality than his.  Eventually, I had recruited a terrific group of young players and when Bill decided to pursue an NHL management position they became the nucleus of my new company.

2. In the early 2000s, you merged your agency with Bobby Orr’s agency to create Orr Hockey Group.  What motivated that decision? As a follow-up, how has your agency changed over the past 10-plus years?

To answer that I have to go back to my 1991 move to Philadelphia.  By then I had 44 players in the National Hockey League including Eric Lindros, who given the circumstances, was taking up a large portion of my time.  As a sole practitioner I recognized my limitations going forward and made a commitment to current clients that I’d refrain from recruiting and focus my attention on their careers.  That’s what I did over the next ten years. However, as those clients got older and began retiring, I found myself with time to replenish my client base.  While considering what my next step might be I ran into Bobby (Orr) at the NHL Draft in Pittsburgh.  Following a brief chat and subsequent meeting, we decided to work together.  After the better part of a couple of years we made the decision to purchase the hockey division from Woolf & Associates and form The Orr Hockey Group.  Why?  Frankly, the hockey business differs in too many ways from any other professional sport to intermingle under one roof.  We just felt more comfortable tailoring our services to the needs of a hockey specific clientele.  So after some thirty years I found myself coming full circle and becoming Bobby’s partner.

Perhaps a better question might be “what change has had the greatest effect on the agent industry over the past 10+ years?”  Without question, the advance in technology has provided a level of communication with our clients that we never imagined possible years ago.  Consider that we used to sit up late and listen to a radio station from St. Catherine Ontario to find out how our Major Junior clients had done earlier in the evening.  Today we get instant results for every player, in every league at every level of competition at the push of a button on our iPhone.  Before cell phones, we couldn’t reach our young junior clients until after 7pm when they’d be finishing practice and back in their boarding houses.  Meanwhile, while travelling in a car or coming off a plane your first challenge was to find the nearest pay phone to check your messages and return the numerous client calls.  You didn’t leave home without your ‘calling card’.  Today of course we have instant access to our clients via text, email, or voice call.

3. What are the one or two most important negotiation skills that you’d suggest younger agents acquire?

Recognize your own strengths and weaknesses.  Tailor your approach to match your personality.  As mentioned earlier, I was mentored by Bill Watters.  For those who may not be familiar with him, Bill was a former first round Canadian Football League draft pick, with the size and presence you’d expect.  He has a friendly loud boisterous manner which he used to full advantage.  That ability to disarm a General Manager combined with his command of the English language and mathematical prowess provided a poster image to emulate.  The problem was I’m 5’6”, rather quiet in demeanor and my feeble attempts to project the same influence during a negotiation fell well short of my intent.  Finally, Bill gave me the advice I needed most.  He brought me into his office and told me straight out that as flattered as he might be that I was trying to mimic his approach it wasn’t going to work.  He helped me recognize my own attributes and how to blend those traits with my personality to gain the necessary trust and respect that precedes a successful negotiation.

Rick Curran has been a hockey agent for over 35 years.

4. As you have progressed in your career, what has been the most rewarding part of your job?

Without doubt, the personal relationships.  Keep in mind that I had recruited my initial clients when they were only 15 or 16 years old.  The majority of them went on to enjoy 15 to 20 year playing careers before retiring.  Those friendships have now flourished for 20 to 25 years.  The tokens of appreciation (special game worn jerseys; Stanley Cup Clocks and Rings) I’ve received are second only to the kind words of gratitude expressed at retirement and induction celebrations over the years.  Many now hold key positions throughout the National Hockey League which has been a tremendous benefit to my son as he apprenticed in the Hockey World.  Rather than live through the awkward introductory stage, he’s known these people since the day he was born.

5. The industry is super competitive. How do you prevent clients from leaving?

Those are the more disappointing moments of my life.  Fortunately, it hasn’t happened very often over my 35 years in the business but I’ve always taken it very seriously.  You look for the reason things went wrong and how you might have prevented the defection.  That introspection has often led to an improved business model.  Having said that there are times you’re not at fault.  You can provide a client with a lucrative contract and enhance his opportunity to play, but you can’t skate for him.  At some point he has to accept the responsibility of fulfilling his obligation to perform.  Unfortunately, it’s the nature of the business when a professional athlete struggles for too long he looks to change things in his life and the agent is usually the first to go.

6. In 75 words or less, what advice would you give to aspiring professionals who would like to work at a sports agency?

My second thickest file is filled with resumes of those who’d love to work in our business.  I can only suggest that an aspiring individual try to work with their graduate or law school to find a summer internship program they can participate in.  Find a mentor.  Look around for someone who might have been where you are a short while ago.  Choose wisely.  Take time to recognize an individual with integrity and a reputation for working well with others.  Now try to be their ‘most valuable player’.  Within time, learn to anticipate their professional needs and be ready to provide correct answers/solutions when challenged.