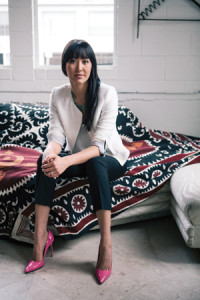 Lindsay Kagawa Colas is Vice President of Action Sports & Olympics at Wasserman Media Group. Colas is a double graduate of Stanford University where she received a Bachelors of Arts in Political Science and Masters in Sociology- Organizational Studies.  While at Stanford, Colas was an All-District 8 performer and two-year captain of the Women’s Volleyball Team that during her tenure, appeared in two National Championship matches, winning an NCAA title in 1997. Colas has been named to Sport Business Journal’s List of Women “Making Their Names”.

D’Bria Bradshaw: When did you realize that you wanted to pursue a career as a sports agent?

Lindsay Kagawa Colas: I got my first opportunity with an agency when a mentor of mine from Stanford introduced me to Bill Duffy while I was working on my post-graduate fellowship. I was exploring how professional athletes could identify and advance their community interests in a more substantive and impactful way. Originally, my conversation with him was purely informational, but as I was gathering info on what sorts of charitable consulting services would be of benefit to an agent like him, the conversation turned into a job offer. A few weeks later I began as Bill’s Executive Assistant with a green light to establish the charitable arm of BDA Sports, BDA Giving. From there, I quickly evolved into a player manager and learned the ropes on the NBA side.

It was a couple years later that the phone rang with an NBA GM inquiring whether Bill would be interested in representing Diana Taurasi. A light went off for me at the moment and I knew I wanted to represent her. Bill, Diana and I met, immediately clicked and very quickly, it became clear to me that she represented both the incredible potential and lingering challenge in the women’s game. She was bold, charismatic and a winner – all the ingredients that would make our male clients commercial stars – but the WNBA was relatively young and salaries and sponsor dollars reflected a significant pay gap between the women and men. We began working with Diana to create opportunity and ultimately, close that gap. So, relatively quickly, rather than following a scripted career plan and instead pursuing interesting opportunities to learn, I found myself standing squarely at an intersection of sports business and social justice; it was inspiring.

D’Bria Bradshaw: You don’t have a “traditional” agent educational background, you decided to obtain a Masters in Sociology, in what ways has this helped you succeed in the field?

Lindsay Kagawa Colas: I don’t think there is a “traditional” agent background. Nearly everyone you meet in this business has taken a different path and along the way, acquired a skill set that enables them to find success and insights that set them apart.

Specifically as it comes to my path, in addition to an academic focus on organizational studies and social movements, much of my learning was about service. This includes work I did in the Athletic Department during my Master’s year and also in Tanzania doing HIV/AIDS education during my last quarter. And that’s what being an agent is about: it’s a service industry where clients come first.

Lindsay Kagawa Colas: I loved my time at BDA and credit Bill with giving me my start and providing me with the autonomy and support to develop BDA Giving and then build out a Women’s practice. He continues to be incredibly supportive and actually served as the officiant in my wedding a few years ago.

Joining Wassermann was all about building a best in class practice for female athletes. My colleague, Dan Levy, went to Wasserman in 2008 and I joined him in 2009. His client, Mia Hamm, and women’s soccer are a success story that I wanted to build on. I played volleyball at Stanford and with the emergence of Beach Volleyball, I was interested in expanding my practice to represent women in other sports. It felt like our impact as a collective could be greater. Casey Wasserman was, and continues to be, exceptionally supportive of our group. The commitment that he and people like Arn Tellem and Steve Astephen continue to demonstrate not only to our clients, but to empowering women in general, is unparalleled in our business.

D’Bria Bradshaw: Where do you see yourself and the industry heading over the next 5-10 years?

Lindsay Kagawa Colas: Technological innovation and shifting social values will continue to elevate the value of transparency, authenticity and engagement. The smartest brands are finding ways to connect to evolving consumer values around things like same-sex marriage, multi-racial families and marketing female athletes through their performance instead of sex. In my world, that means more opportunity for a broader range of athletes. While choosing a spokesperson has always been an aspirationally oriented decision, the pace and direction of social change is driving the best brands to aggressively create campaigns that reflect and celebrate diversity in all forms. Take a look at what Cheerios, Marriott, Covergirl, Levi’s, Nike and Honey Maid have done. While in the past, potential controversy from taking a stand may have motivated brands and athletes to stay silent on divisive issues, today, those who take advantage of cultural shifts quickly and creatively reap massive rewards. For someone like me, who works in sports because of its ability to drive social change and who represents often marginalized athletes, that trend is particularly exciting because while today, its a strategy that can help a brand stand out, in 5-10 years it will just be the norm.

D’Bria Bradshaw: Working primarily in action sports and the Olympics, what has been your favorite sponsorship or endorsement deal that you’ve worked for?

Lindsay Kagawa Colas: It’s tough to pick one. I’m proud of every deal that we do for our clients because our relationship with them is so personal. Recently, I would say that Brittney Griner’s book deal with It Books/HarperCollins stands out. The opportunity to do a memoir, In my Skin, came very early in her professional life, but we made a decision to lead with authenticity and advocacy and Brittney didn’t hesitate for a moment. After having to censor herself for so long, she was eager to tell her story and most importantly, connect with people who have similar struggles. What’s interesting about Brittney is that her appeal comes both from the way she challenges a lot of traditional assumptions, and also the way so many people can identify with what she has overcome. Writing a book and providing more context to the conversation she was already having felt natural, but doing it with the right partners – from the publisher, to her collaborator (the amazing Sue Hovey), and having a strong digital and PR strategy was critical and I feel good about the way things turned out. Projects like In My Skin are both very personal for clients and help change the way people think about the world. It’s a privilege to have been in a position to facilitate the book and encouraging to see a bold move from a company like HarperCollins rewarded with commercial success.

D’Bria Bradshaw: What obstacles have you overcome being a woman that has achieved so much success in the industry?

Lindsay Kagawa Colas: I am not a woman finding success by playing a man. I am a woman with a fundamental understanding of what women want and what is important to us. My clients have an advantage because I can better predict and respond to their needs.

Yet, like so many other women, en route to success I get called “pushy” and “bossy” and a “pain in the a**” while my male peers are celebrated for being “results oriented” and “hard nosed.” It’s an unfair burden for all of us, but it’s something that as a woman you have to simultaneously acknowledge, fight and embrace. In negotiations, we must be extra prepared, we must have a thick skin and a sense of humor, we must be able to clearly communicate and support our position and in finding success, we have the obligation to empower others. That’s when we are all at our best. None of us got where we are alone and real progress requires that we advocate for each other (and teach young women that “bossy” is a compliment).

D’Bria Bradshaw: What advice do you have for those looking to enter the representation field?

Lindsay Kagawa Colas: Very few straight lines exist to becoming an agent, so spend time exploring things that are interesting to you. Don’t focus on money or titles or expect clarity to come all at once. Stay open to opportunity, treat people well, be the person who gets it done, learn from failure and stay curious. While building relationships, accumulating experience and developing an expertise will add value for clients or whatever position you pursue next, you have to figure out what you’re passionate about. Your resume should be about more than what you want to be – it needs to be about who you want to be and why. Because ultimately, if that’s not clear tor you, why would a client trust you to help make it clear for her?