Is It All About The Benjamins? 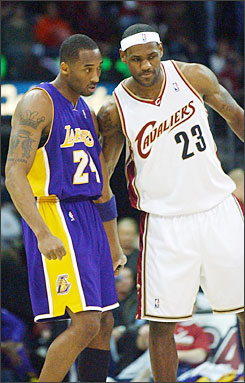 Brandon Jennings decided to go overseas to play for Pallacanestro Virtus Roma in the Italian league instead of going to Arizona.  Apparently he did not have the scores to play for U of A and additionally wanted to start making cash now instead of waiting a year.  Let’s make one thing clear, though: Jennings did not choose to go overseas instead of playing in the NBA.  On the other hand, Carlos Arroyo chose to go to Israel.  Other former NBA players who have elected to go overseas this year are Serbia’s Nenad Krstic, Spain’s Juan Carlos Navarro and Jorge Garbajosa, Argentina’s Carlos Delfino and Slovenia’s Bostjan Nachbar and Primoz Brezec.  Notice a common thread?  These players are not American born, and have ties to foreign countries.  Kobe Bryant and LeBron James were born in the United States, have lived in America for the majority of their lives, and are living like rockstars in the U.S. of A.  Would they really leave to play in another country just because a team might offer a larger contract?

I just got back from Chris Paul’s Winston-Salem Weekend.  I witnessed LeBron James sitting down cracking jokes for about three hours, hanging out with some of his best friends in the NBA.  If he goes overseas to play in Moscow, who will he be kicking it with?  Can money really buy more happiness when you are already making more than $20 million per year?  Would it be worth moving far away from all of your friends and family.  I don’t think so, which is why I have yet to buy all of the reports that LeBron and Kobe are looking at overseas options.  As a caveat, I do believe that they are listening to what is being overseas in an effort to gain leverage when discussing new deals with their teams and American endorsers.  Why not stay in the U.S. and use potential offers overseas to make a little bit more dough in the process?

Kobe will opt out of his contract next year, but do not jump to the conclusion that he will be going abroad.  He will entertain overseas options, but do not rush to get your panties in a bunch.  Entertaining offers does not mean anything.  Sonny Vaccaro believes that Kobe may be a trailblazer and be the first superstar to leave the NBA for $50+ million elsewhere.  Maybe it happens, but if I were a betting man, I would put my money on him staying in the states.