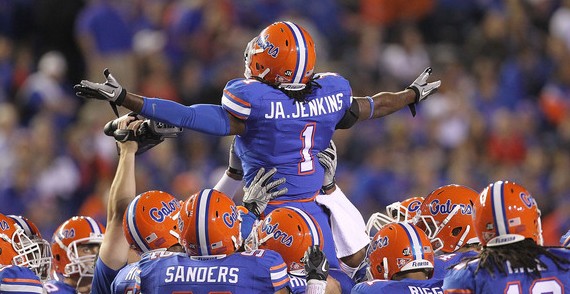 A league source has stated that former University of Florida cornerback Janoris Jenkins is now a client of Ben Dogra and Creative Artists Agency (CAA).

Jenkins was a first-team All-SEC selection.  He was named to College Football News and Sporting News Freshman All-American team.  Rivals.com ranked Jenkins as the 6th best cornerback of his class coming out of high school, and he only improved upon that ranking while at the University of Florida.  On November 10, 2010, Todd McShay predicted that Jenkins would be selected at #15 overall in the 2011 NFL Draft, ahead of Mark Ingram, Nick Fairley, and Julio Jones.  But Jenkins was also kicked off of the Florida Gators team after a couple of marijuana possession-related charges.

Instead of entering his name into the 2011 NFL Supplemental Draft, Jenkins decided to play his Senior season at North Alabama.  I expect him to be a first or second round pick in the 2012 NFL Draft.