The following interview is with Garrett Broshuis an attorney with Korein Tillery in St. Louis, Missouri and a representative with Platinum Sports and Entertainment Group. Connect with Garrett on Twitter. 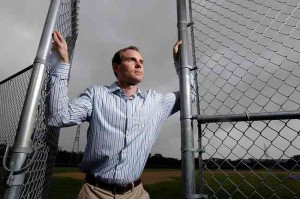 Garrett Broshuis is a University of Missouri graduate where he majored in psychology, and he earned his Juris Doctor from St. Louis University School of Law. Garrett is currently an attorney at Korein Tillery where he focuses his practice on complex litigation, and he also works with Platinum Sports and Entertainment Management as an Agent and Director of Player Relations. Garrett is currently awaiting his agent certification from MLBPA.

At Korein Tillery, Garrett is one of the attorneys in the landmark case, Senne et al v. Office of the Commissioner of Baseball, et al. The Senne case involves three former MLB minor league players who are suing MLB for violating wage and overtime laws. Garrett has first-hand experience with the MLB because he was a minor league baseball player for six years with the San Francisco Giants. He is also a Contributor for Baseball America. In college, Garrett was both an All-American baseball player and an Academic All-American.

Josh Corriveau: Can you describe how you transformed your minor league baseball career with the Giants into a sports law career?

Garrett Broshuis: I had an advantage since I had played professionally, and I played in college as well.  I had a head start on a lot of people. But, even with that head start it still takes some hard work in order to really position yourself in this marketplace. Getting into sports law is not an easy thing to get into. Even with a little bit of a head start, it hasn’t been easy and I am still working towards it.

Josh Corriveau: What is your role with Platinum Sports?

Garrett Broshuis: I work in the player relations area. If anybody has any issue or if they want to talk to anybody that has played before or if they just want to talk things through; I am the kind of guy they turn to. It is a catchall type of thing I do. I also help represent a handful of guys. I have assisted in a variety of things. Sometimes they send you things when a guy is just searching for an apartment, and I will help where it is needed. There are all types of things that come up before spring training and in the off-season as well.

Josh Corriveau: How difficult is it to juggle life as a complex litigator and life working with Platinum Sports, as well trying to pursue your MLBPA certification?

Garrett Broshuis: Life is always about finding balance. I think my life as a student athlete and later as a professional athlete prepared me well. At the University of Missouri, I took my academic career as seriously as my athletic career, and I was both an All-American and an Academic All-American. It took a tremendous amount of hard work and discipline, and those lessons carry over into my current career. But again, you have to find balance. My job is important to me, but my family is more important than my job. And you also have to have some fun in life. As long as I keep that in mind, life feels right.

Josh Corriveau: You recently applied for certification with the MLBPA. What are your aspirations with representing professional baseball players? Where do you see yourself in 5 years? What do you believe to be your greatest challenge?

Garrett Broshuis: I see myself representing a handful of major league players while mainly practicing complex litigation. And some of the complex litigation will be connected to the sports world, just like the minor league class action that we’re currently prosecuting. Whether it’s an antitrust case or a class action, rectifying past harms is a rewarding and challenging experience. Yet I also truly enjoy working with athletes. There’s actually some synchrony between the two areas. Either way you’re helping people in a meaningful way.

Josh Corriveau: In your opinion, what advantages does the MLB offer as compared to the NBA, NFL, and NHL? Any disadvantages?

Garrett Broshuis: One of the neat things about MLB is something that a lot of agents in other sports would call a downside of MLB. You get to represent minor leaguers before they become major leaguers. It really allows you to build a great relationship with the athlete before the athlete signs that first big contract. You get to know all the people in the athlete’s life on a personal level. And you’re getting to help out a kid when he needs it the most, before he makes it big. Some find that less sexy, and some are turned off because there’s no money in representing the minor leaguer. I find it important and meaningful.

Josh Corriveau: What do you do to prepare for a player’s contract negotiation? How does that differ from your preparation for litigation?

Garrett Broshuis: It all starts with preparation. Whether it’s a deposition for a $150 million case, or for contract negotiation with a major league team. I’ve been lucky enough to have worked with very talented people, and watching them prepare for things has been the biggest lesson I have taken from it. I’m still learning a lot myself. I’m still in a relatively young stage of my career from a complex litigation standpoint and from a business standpoint in a contract negotiation or with any type of sports law. That’s the one takeaway: it all starts with preparation. You need to out-prepare the other side. You have to make everything you do the number one priority as you go into it. You almost have to find another level of preparation that you didn’t know existed.

Josh Corriveau: How has law school prepared you for your work in the sports industry and in your role with your firm?

Garrett Broshuis: I learned a lot in law school to help prepare me for what I am doing with both of these things. The one thing that really prepared me on the litigation side is doing the practical skills stuff and the clinics that we had in school, where you are actually working on real cases and contributing to real things that end up being filed in court. And, now also, a lot of these things in class, they seemed like these higher-level debates sometimes. But, thinking through those issues at a high level does really helps you down the road because it requires that practice of high level thinking that you will need throughout your career no matter what job you are doing.

Josh Corriveau: Can you explain your role in the Senne et. al v. Office of the Commissioner of Baseball, et al case?

Garrett Broshuis: I am an attorney playing a large role on the case. Our firm, Korein Tillery, is one of two firms that are leading this charge. We along with co-counsel are doing all of it. It’s an opportunity to hopefully better the lives of thousands of present and future minor leaguers. Those guys only make a few thousand dollars for the entire year, and they’re often piling 5 or 6 guys in an apartment, sleeping on air mattresses. Hopefully this suit can change that.

Josh Corriveau: What advice do you have for law students or others that want to pursue a career in sports?

Garrett Broshuis: Work hard but also have some fun. You have to work harder to get into the sports world than almost any other industry. But you also need to have some fun, because it’s largely about building relationships.

Josh Corriveau: On behalf of SportsAgentBlog.com and all of our readers, I would like to thank Garrett Broshuis for taking the time out of his schedule to share his experiences and vast knowledge with us today.